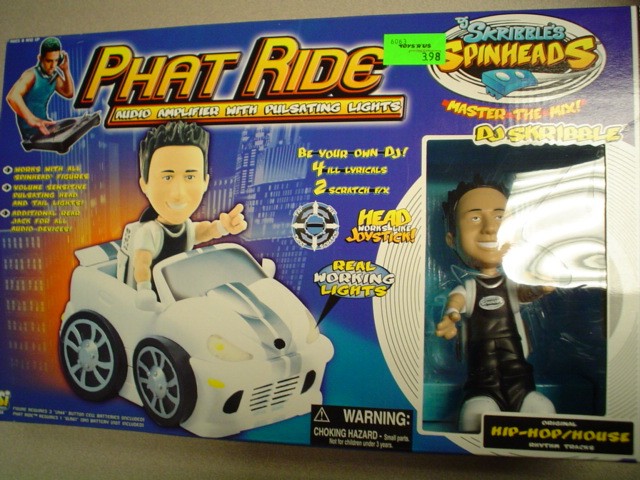 I had a vague recollection of who DJ Scribble was because I saw him on WWF "Sunday Night Heat" from WWF New York.

This was back when the WWE was called the WWF and they had a show called "Sunday Night Heat" and there was still an eatery named WWF New York.

It was the era that I like to call "The greatest time of my or anyone else’s lives."

I only remembered DJ Scribble because I thought his name was stupid. So did WWF superstar Tazz who called him DJ Scrabble multiple times.

Inside this box is a Scribble Spinhead! Plus it comes with a Phat Ride.

Still, it wasn't worth $3.98. However, on the day I bought it Toys R Us was selling it for 50% off of the already discounted price.

Scribble is kind of like a bobble head doll only it doesn't bob. You have to turn it manually.

The lack of automatic bobble head action is overcome by a myriad of scratching sounds and catch phrases including (but no limited to):

I am DJ Scribble.
Takin' a phat ride.
Get your hands up!

Perhaps he's supposed to be a car thief.

I tried to act this out with my stupid Daredevil toy and some other action figures I found in the trunk of my car but then I lost interest. 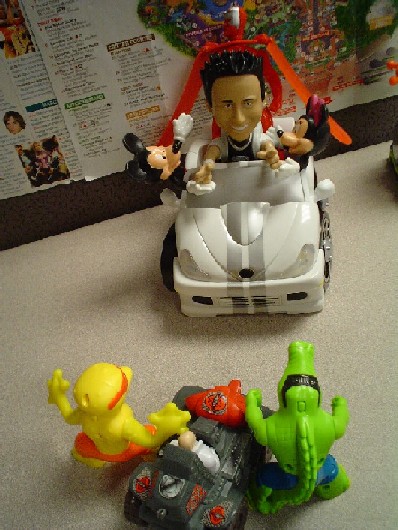 Posted by Guy Hutchinson at 9:38 AM