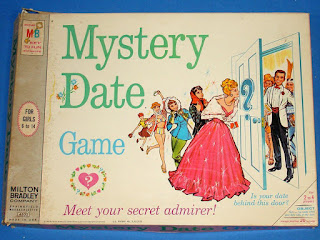 A few years ago I was watching a Simpson's re-run.

It was the one where the family goes to Ned Flanders' beach house and Lisa meets some "cool kids" and for a few weeks SHE is cool and Bart is the unpopular Simpson kid.

In one of the scenes Homer, Marge, Bart and Milhaus all play (the only board game the could find in the house) Mystery Date.


The scene featured this memorable exchange:


Marge:
Come on Homer. Open the door for your mystery date.

As a board game fan I checked eBay and found that Mystery Date was indeed a real (and very popular) game from the 1960s.


Here is a write up from boardgamegeek.com


A large white door located in the centre of the board has five 'dates' waiting inside. Depending on how the doorknob is rotated, a different guy will 'appear' when the door is opened.
Players try to collect a set of four cards. Each set of four cards corresponds to one of the 'dates' hidden behind the door (apart from the infamous 'dud').
Gameplay is determined by the instructions on the square a particular player lands on. Cards may be taken from the draw or discard pile, or from other players. When a player holds a correct set of four cards and lands on an 'open door' square the door is opened, revealing the date.
If the cards do not correspond to the date, the player's turn ends but their set of cards are retained. If the 'dud' date is revealed, all cards held by the player are lost and replaced with a fresh set from the draw pile.
If the correct date appears when the door is opened the game is over and the player opening the door wins the game.
This game was first released in a white box in 1965 and had a 'groovy' upgrade in the early seventies with new artwork.

Well, this weekend I got to try the brand new High School Musical edition of the classic board game (on sale at Target for $15.) 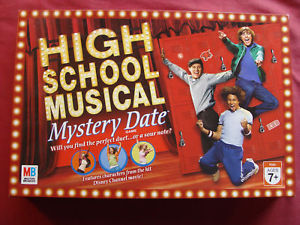 As far as I can tell from photos, the layout of the board and the gameplay is the same.


You choose a playing piece (all female) and you go around the board trying to collect 3 matching outfit cards. Once you get (for example) your "skating outfit" you must land on the "open the door" space and hope that you open it to reveal your skating date.


The door is cleverly designed to open to a different date at random due to the shapes of the "date cards" and how they correspond to the turn of the door knob.


The "dud" is a female school administrator with the words "detention" on the card. 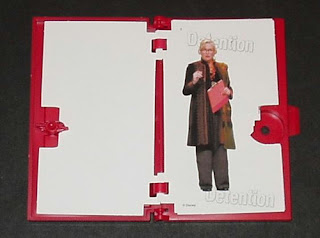 If you open the door to find her, you lose your outfit (no... you don't have to play naked) and lose a turn.

There is also an odd twist to this versions. Two of the characters are siblings. It's not addressed in the rules, but if you play as Sharpay Evans you can open the door and win a date with her brother Ryan.

Posted by Guy Hutchinson at 9:13 AM 1 comments

Take a look at this beautiful sight:

It's Sid Grauman's Chinese Theater, located on Hollywood Boulevard between Orange and North Highland. It's my favorite place in the world...

Actually, this is NOT the Chinese Theater, it's a facade. Located in Walt Disney World's Disney MGM Studios, this full sized replica is pretty impressive.

It is used as the entrance for "The Great Movie Ride." In addition to housing a neat, slow moving ride about the history of Hollywood movies this structure features an array of celebrity hand and footprints in the cement... not the same ones as the REAL Chinese Theater, but some big stars nonetheless.

Sure, the real Chinese Theater has prints of such stars as Marilyn Monroe and John Wayne. But the FAKE Chinese has Bobcat Goldthwait and Hulk Hogan.

The stars immortalized in the cement aren't the only differences between the two, there is also a few changes. The real theater has beautiful gold doors... the fake one has green doors. The fake forecourt has some palm trees, the real theater no longer has any.

I could go on all day trying to spot all the differences between the two, but lets face it: you don't really care and I have a Hot Pocket in the microwave.

Recently I took a bunch of photos of the replica of Grauman's Chinese Theater at Disney MGM Studios and now I share them with you.

This really cool dragon image towers above the door:

This is a close up of the smaller statue of a little golden dude who stands just above the door... blissfully unaware of the giant dragon hovering above him:

When I go to the Real Chinese Theater I like to imagine that the dragon has the voice of Sean Connery and he keeps telling me how many minutes to "show-time":

Here I just pretend he sounds like Sean Waltman and he keeps telling me "...there is no wait at 'Drew Carey's Sounds Dangerous':

Here are those doors I mentioned. The doors are all gold in Hollywood. The green is pretty cool, however:

This is some of the detail on the door:

On the left and right of the entrance are "Foo Lions" or "Guardian Dogs." The one on the right is male and his paw is resting on a globe so he can protect the earth. The other lion is female and she has her foot on a cub. They say its so she can protect it:

Taking a closer look at the expression on her face, I am not totally sure she isn't trying to squash that poor baby cub.

The forecourt is a semi-circle surrounding all the hand prints.:

Amazing detail. In Hollywood this beautiful stone carving was covered for decades by a neon marquee. Today it has been restored and looks as nice as it's Florida doppelgänger :

I am so proud of myself for writing the word "doppelgänger" that I am not going to add anything to this picture... plus I don't remember what it is:

Now I remember, these are some of the little metal figures that adorn the roof of the building. I also just remembered that doppelgänger is supposed to refer to a living thing. So, yeah, I used it wrong:

Here is a close up look at one of the decorations adorning the forecourt walls. God, how I wish I could work doppelgänger into this sentence:

In Hollywood this is the Marilyn Monroe wishing well. Here it just looks like a giant infected molar:

The symbolism of dragons, fire and bells are a popular theme in old Chinese design. Did you notice that this thing: ":" appear over the letter 'a' in doppelgänger? Like it's mocking me for not remembering it's name:

This poster frame (advertising the ride) look somewhat similar to the posters at the REAL Chinese theater, but there the posters are bigger.

The inside of the FAKE Chinese Theater is very ornate, but very different from the REAL one. This is mural you see when you enter (in the real theater a similar mural hangs over the concession stand):

This is one of the ornamental chandeliers that hang in the lobby:

Before you get on the ride, you go into a room with film trailers projected on a large screen. Adorning the walls are more art, like this dragon:

Lastly, here is a plaque that hangs outside the FAKE Chinese Theater. It incorrectly states that the Chinese was built in 1928. In fact, the theater was built (and opened) in 1927:

It's really a well done replica of an amazing place. I hope you enjoyed the photos...