A Stupid Lord of the Rings Game

Sure, I know Lord of the Rings isn't topical anymore. After an amazing onslaught over the period of a just a few years the "mania" has died down. Much like other manias that have come before it, it has left some traces behind.

Macarena-mania may have screeched to a halt but I defy anyone to go to listen to watch children's television without hearing at least a few notes of the tune. And yes, Hulk-a-mania is not what it once was but I still see red and yellow bandanas when I look in my sock drawer.

So, although the Lord of the Rings saga has come to a close, there are still some pieces of it that have been left behind.

Such as the Lord of the Rings game on my cell phone.

This isn't something I downloaded; it's on the phone's internet browser. Every time I get movie times I see it. So, after YEARS of skipping over it curiosity got the best of me, and I clicked on it. This is where I found "Ask Gandalf."

At first I laughed hysterically because I thought that Gandalf was the little green guy. Then I remembered that was the Golum. Or maybe that was Shrek. Either way, Gandalf is one of the old guys in the movie. 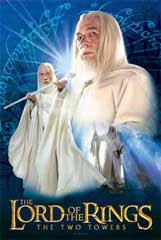 This really isn't a game. It's sort of like a Magic 8-Ball but less magical and you can't get drunk by breaking it open and drinking that blue colored liquid.

You are supposed to ask a question out loud and then hit a button on the phone for Gandalf's response. I didn't really have any questions for him so instead I just read some question that David Letterman asked George Michael in a 1998 interview. I have provided them below, along with Gandalf's answers and my analysis. 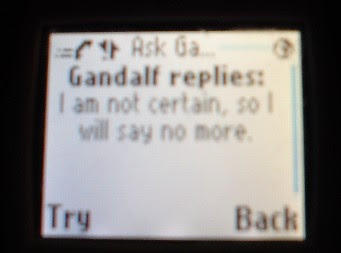 Gandalf: I am not certain so I will say no more.

ANALYSIS: Gandalf may seem to be playing coy, but the fact is that Letterman's show has been forgettable since the mid 1990s. I think I may have been a musical guest at some point, but I don't really remember. Or care.
GRADE: B+
THINGS TO THINK ABOUT: If Gandalf HAD been on the show before, what did he do? I am willing to bet that he let Dave try on his funny hat.


David: It was about a year ago you were arrested in CA. Is all that been all straightened out now? 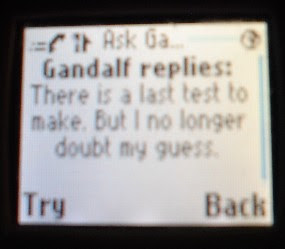 Gandalf: There is a last test to make, but I no longer doubt my guess.

ANALYSIS: Yes, Gandalf must be tested on his ability to be straightened out after being arrested.
GRADE: 4th
THINGS TO THINK ABOUT: They remade the TV series "Flipper" into a movie that starred Paul Hogan. I remember a scene where he had a room full of Spaghettios. I don't remember why.

David: Right. So what exactly happened? 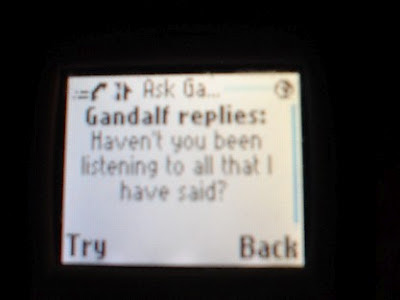 Gandalf: Haven't you been listening to all that I have said?

ANALYSIS: Gandalf is a cranky old bastard.
GRADE: Dr. Teeth and the Electric Mayhem.
THINGS TO THINK ABOUT: Why did they make a sequel to The Whole Nine Yards? Who really wanted to see that? Who even saw the first one? Who played Frankie Figs? Was that Ving Rhames or Michael Clarke Duncan? I get them confused.

Well, with Gandalf being so irritable I will just shut off the phone and try to forget that George Michael was ever on Letterman. 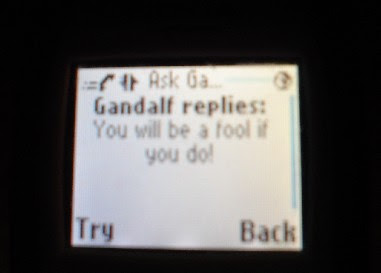 Gandalf: You will be a fool if you do.

Me: Don't worry, I am already a fool. 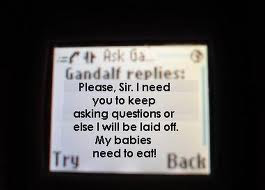 Posted by Guy Hutchinson at 3:14 PM