Taco bell has outdone themselves! They have introduced a kids meal that features Mr. T! 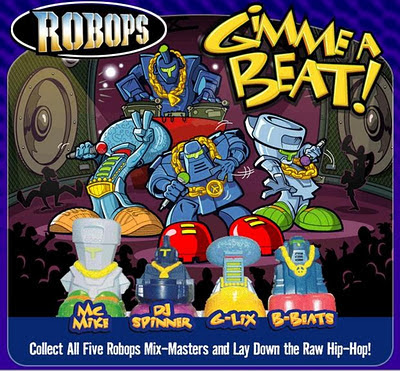 They are called Robops. They are a hip rappers and robots. Their name is a cross between the word 'robot' and the letter 'p'.

Now, as for Mr. T, take a look at DJ Spinner in the back on the turntable. He wears a gold chains and has a mohawk. Just like Mr. T. 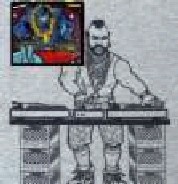 Now making a robot Mr. T brings up many questions: Why would a robot wear gold chains? How would a robot get a haircut, let alone a mohawk? And why isn't Mr. T co-starring in I-Robot?

Whille DJ Spinner tries to get the beat, G-Lix is on the microphone. G-Lix is extending his 2 fingers leading some to think he is holding the peace sign. This is not the case. G-Lix is playing a game of "paper, rock, scissors" (known to some as "rock, paper, scissors" and known to the people of West Virginia as "The way we pick the mayor"). G-Lix is playing the game with a fan in the front row. If the fan wins, he gets to dance on stage with the band. If G-Lix wins, the machines will rise up and annihilate everyone in the stadium. My money's on G-Lix.
By the way, it seems G-Lix was modeled after Spongebob's catankerous co-star Squidward.

Standing on stage in the middle is B-Beats. You may have seen B-Beats starring in the film Iron Giant. 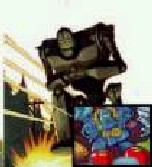 B-Beats is the peacenick of the group as he proudly wears a peace symbol around his neck. He also wears a pair of bright red clown shoes preventing people from taking his message of peace seriously.

The final member of the band is M.C. Mike. He is nothing more than a tube of toothpaste with a hat.

As far as Taco Bell kids meal toys go, Robops are a bit of a let down. They aren't nearly as cool as the recent JAM-phibians, nor are they as cool as this photo of Gene Hackman.

However, being Robots, they are cool.

The Five Coolest Robots Of All Time

5. Voltron:
Made from several smaller (and still cool) robots he maintains all of their coolness to become SUPERCOOL.

4. Tom Servo:
Mystery Science Theater 3000 owes much of it's sucess to this wisecracking robot. He is the essence of cool.

1. Robot (from Rocky IV)
Would Rocky IV have been cool without Robot? I don't even want to think about it. From the moment Pauly recieved Robot on his birthday, the film was awash in coolness.
Posted by Guy Hutchinson at 10:51 AM