Posted by Guy Hutchinson at 10:52 AM 5 comments

If that's true then he is a chef:
https://culinaryagents.com/entities/32326-The-Bronx-High-School-of-Science
Posted by Guy Hutchinson at 10:22 AM 7 comments

Bruce’s death Tuesday came six months after the shark had made a rare appearance at the Universal Studios party for Superbowl 50. He died in his sleep at his San Diego home, Universal said.

“Jaws,” released in 1977, showcased Bruce's ability to bite things and look ferocious, however off camera Bruce was different than his screen alter ego. "He was a sweetheart. He always enjoyed making others happy, even if he knew he was going to eat them." friend Kevin Clarkson said.

Bruce declined to appear in the sequel, Jaws 2, because he wanted more money than Michael J Fox.

"I thought it was a legitimate request," Bruce said in an 1992 interview, "Fox was just a kid at the time and didn't have that much money."

The studio refused and instead cast Jeffrey Weissman as Jaws and made him hang upside down for all his scenes. "I don't know what we were thinking," said a remorseful Ted Innis, "By the way, how did you get my phone number?"
Posted by Guy Hutchinson at 9:57 AM 2 comments

Wow, this is a doozy.

My friend Jonathan Navarro pointed me to this video. I'm stunned that I had never heard of it.

There once was a ride at the Warner Brothers Movie World theme park in Germany that featured both ALF and the Gremlins. 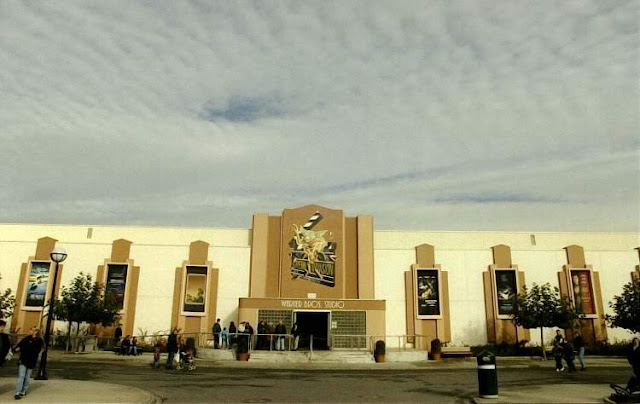 ALF ride? That's surprising. I love ALF. I have been a big fan since the original TV run and I have enjoyed a lot of his comebacks. Particularly I enjoyed the ALF's Hit Talk Show that ran on cable back in 2004.

ALF was a pretty deal in the US, but I have always heard he was a bigger hit in Germany. I understand he had some hit records in Germany and that his TV movie Project ALF actually had a theatrical run there.

So this ride existed in Germany from 1991 (shortly after the cancellation of the show) to 2001. There was a version in Australia, BTW but Beetlejuice replaced ALF in that version.

Guests would enter into a theater and watch a film.

We start things off with a dubbed greeting from Sandra Bullock in German. 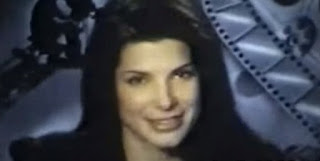 Then we get a series of random film and TV bloopers: 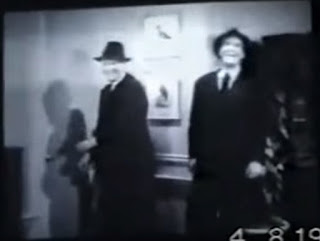 Then color bars appear and it sounds like the German announcer tells us we are going live to the set of ALF. 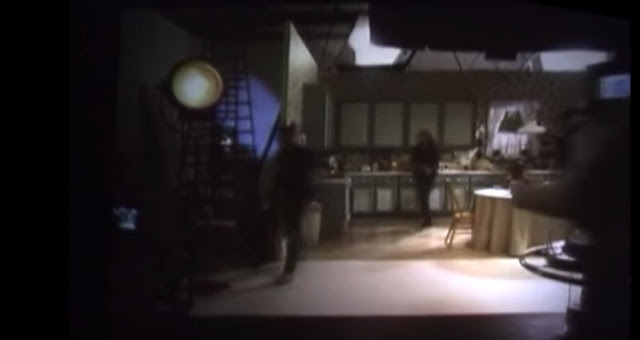 This was pretty neat. I always enjoy seeing television sets. 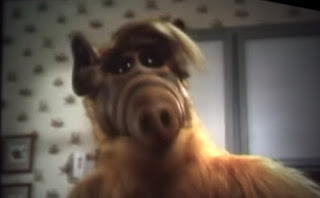 ALF, who has a much more commanding German voice, chases the cat into the kitchen cabinets. He reaches in and is attacked by a Gremlin. 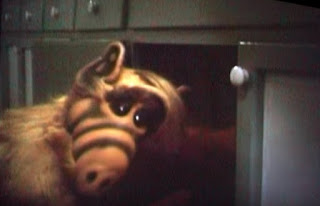 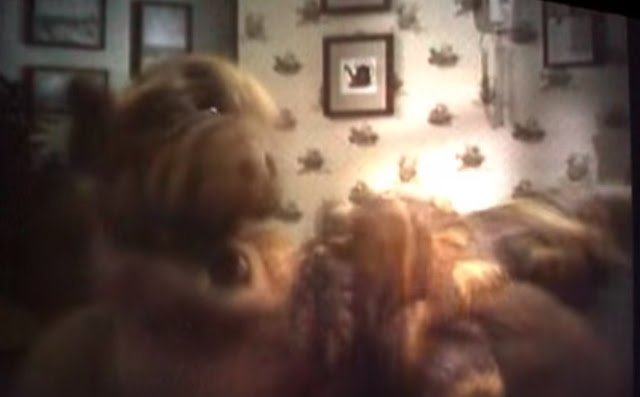 Gremlins then destroy the Tanner house. 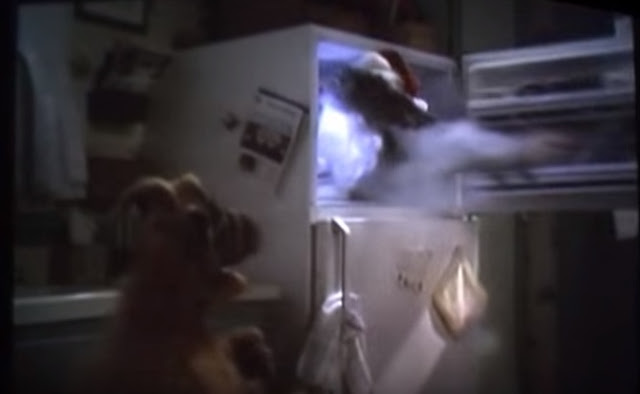 The camera falls to the floor and ALF addresses the audience. 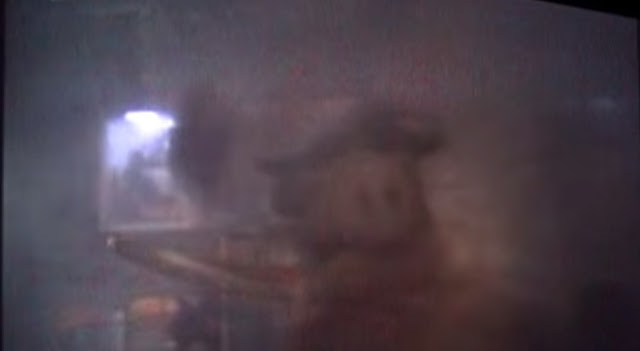 The screen melts and the Gremlins do the shadow puppet thing they did in the movie. 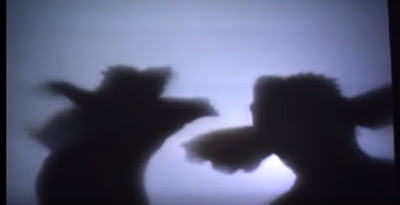 Then we board a vehicle and head into the Warner Archives. An animtronic ALF and Gizmo are trying to defeat the Gremlins.

This is really cool. When I first saw this I assumed there would be no more ALF after the video section. 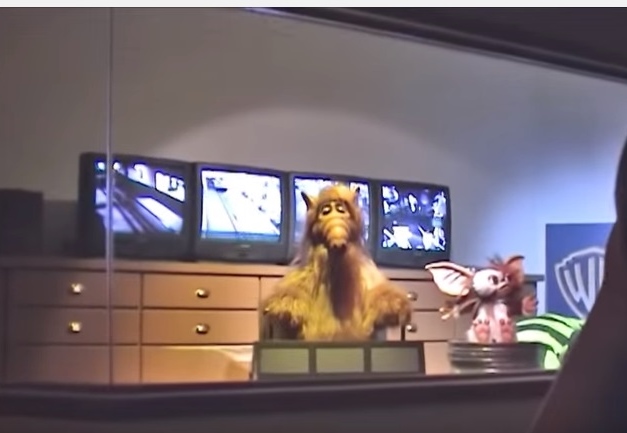 The ride moves slowly through elaborate set pieces seeing both ALF and Gizmo trying to maintain order and save the archive. Meanwhile the the Gremlins are trying to destroy it. 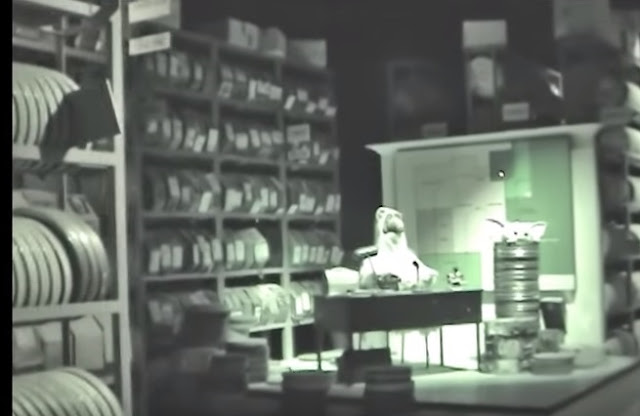 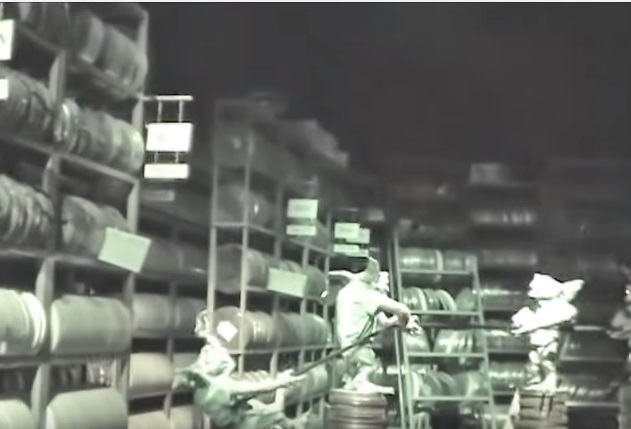 Here the Gremlins have tied a projectionist up with film. They keep lowering and raising him from the ceiling: 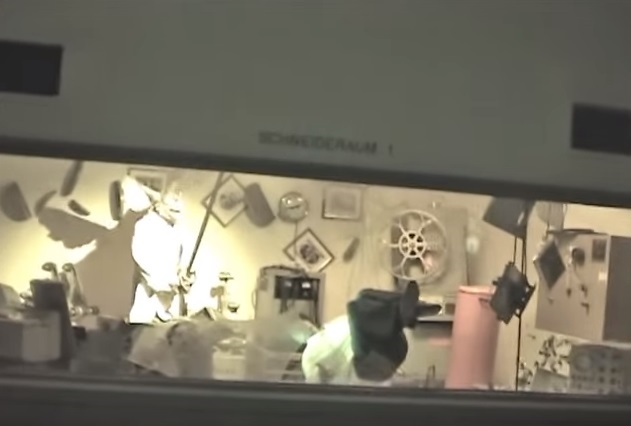 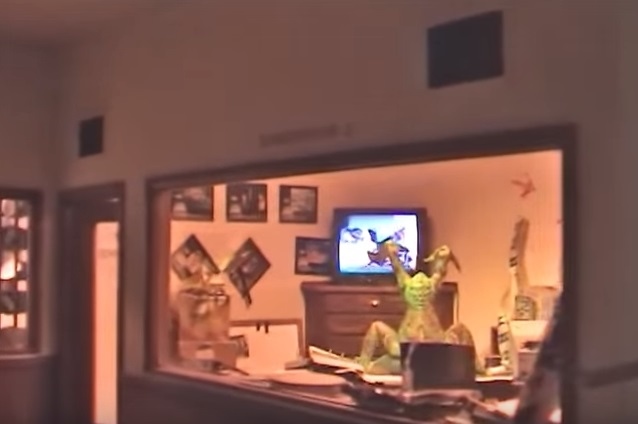 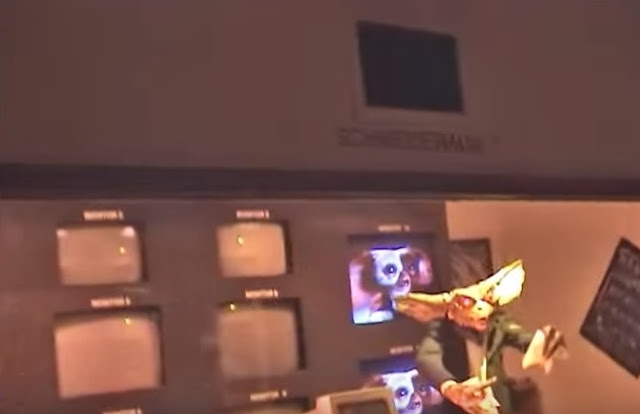 We also see some small set pieces with Gremlins on them. 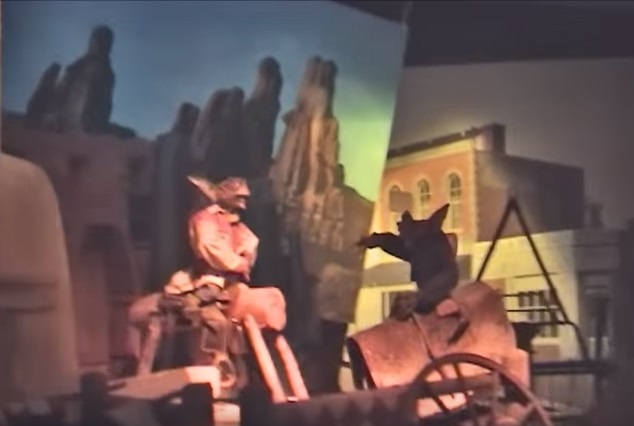 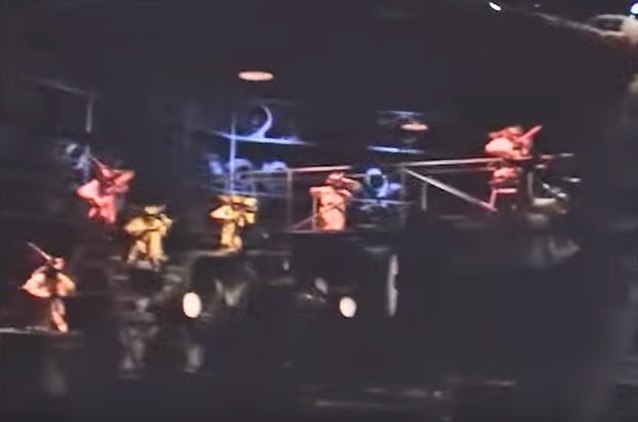 The end of the ride seems to come out of nowhere. Perhaps I'm missing something due to it being in German. The Gremlins wiki says "Things look bleak, but just when you think you are forever trapped by the little green beasties, Gizmo and ALF find a 'Shocking' way to eliminate the Gremlins and save the day!" so the lever must shock them all to death. 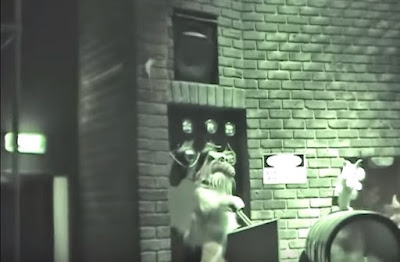 At the end of the ride ALF is on a firetruck as we exit. He waves to us. 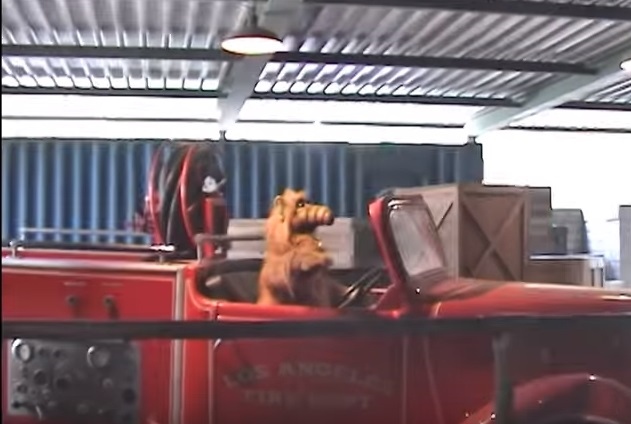 Below are some additional shots I found online that provide clearer images of the Gremlins and ALF: 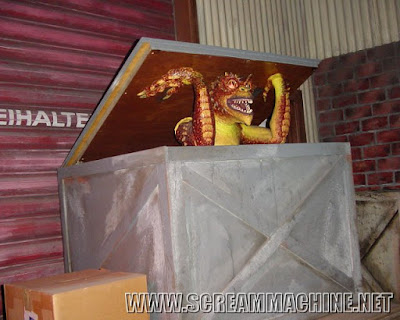 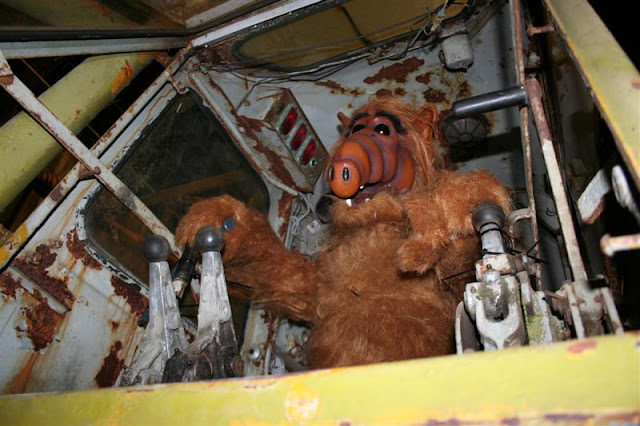 It looks like a really fun ride! Surprised something like this flew under my radar for so long! Really grateful to the folks that took the video and photos above.


EDIT: There are some other videos on YouTube that show the ending clearer:

They are spraying water around the room, ALF turns on the high voltage and they get zapped and with a pretty cool effect they disappear: 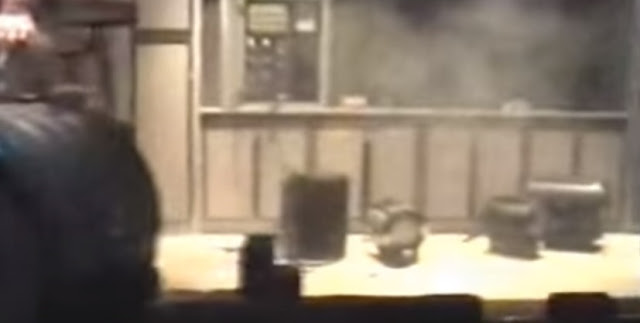 At the end Gizmo is hanging on the fire truck with ALF: 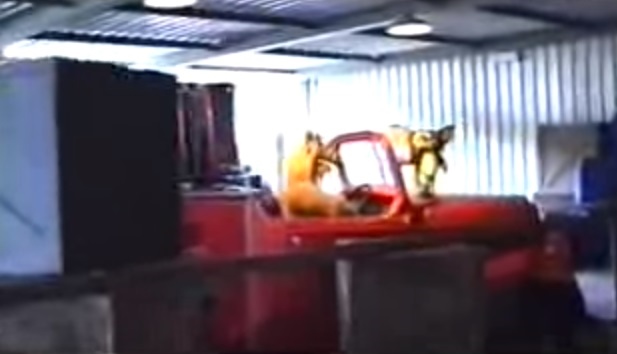