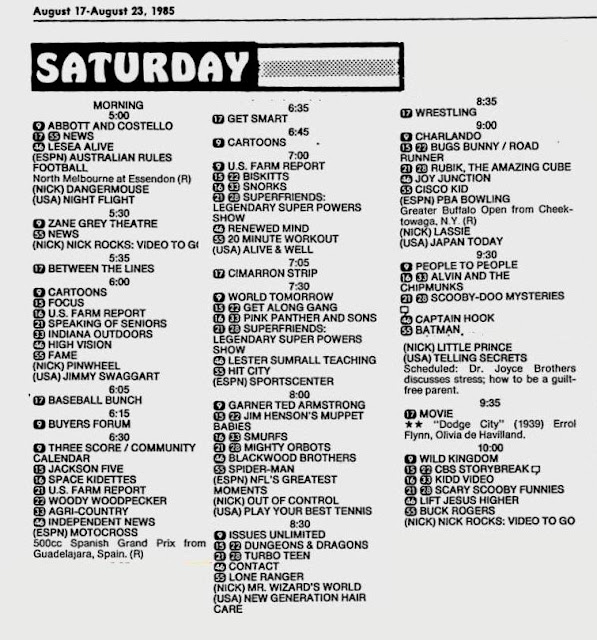 Ahh, the memories. I decided to see what I would watch as I ate a bowl of Fruity Pebbles on the living room couch... constantly worried my Dad would walk in and make me eat at the kitchen table.

I circled the shows in red: 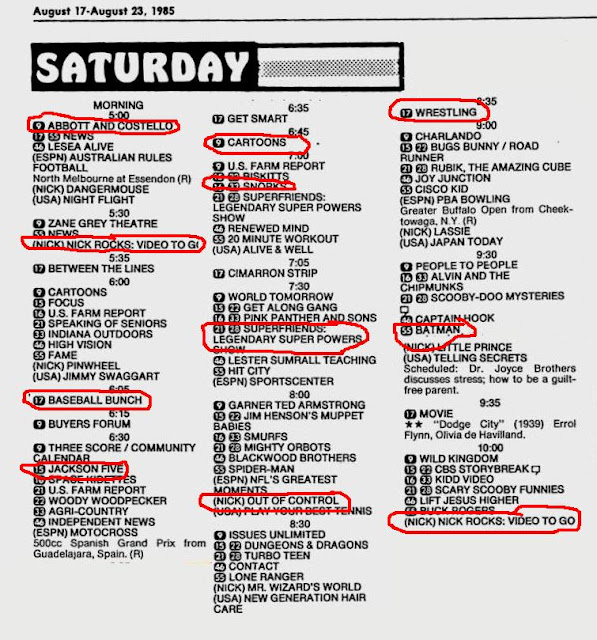 At 5am... yes kids, we used to get up early on Saturday, at least I know I did. You HAD to. The rest of the day was all boring shows for adults.

I would start my morning with Abbott and Costello. Not sure if this was the cartoon or some live action work. Id be happy either way.

5:30 it would be Nick Rocks! This was like MTV for kids. Usually they showed some sillier videos that MTV wouldn't bother to show.

At 6am I would be stuck. Baseball Bunch is on in 5 minutes, but Nick Rocks is over. I didn't really like Pinwheel, so I probably wouldn't watch 5 minutes of that.

I'd pop on the Atari and save the world. I would probably have my younger brother run back and forth to the kitchen to check the microwave clock until it was 6:05.

Then we could enjoy The Baseball Bunch where Johnny Bench would teach baseball with the help of the San Diego Chicken and the Kool Aid Man.

Because of channel 17's wacky schedule I'd be forced to flip before the end of the show.

NOTE: This paper was from Warsaw, Indiana. I lived in NJ, but we had wacky stations there too.

6:30 am I would watch the Jackson 5 cartoon and then at 6:45am I would flip over for the generic promise of cartoons. If that didn't pan out I would be back with the Jackson 5.

Regardless, at 7am I would be onto The Snorks. I know, the cool choice is Justice League, but I'm keeping it real.

7:30am I would catch the second Superfriends show and then at 8am I would laugh at Dave Coulier's antics and hope against hope that he would say "cut it out".

If he did I would probably jump up and down on the couch. Jubilation!

At 8:35am I would probably see what the first experiment Mr. Wizard had before turning on the "wrestling". Not sure what federation this would be, but I wouldn't care. This was the summer after the first Wrestlemania and I would have watched any wrestling that came on the TV.

An hour later I would be late for the 9:30am Batman, which I hope would be one of the one's with Burgess Meredith as the Penguin. He was almost as funny as Dave Coulier.

At 10am, back to Nickelodeon for the second showing of Nick Rocks. Sure, I just saw this a few hours ago but now I could see it AGAIN. \

Plus, now I knew which videos were good and which weren't so I could probably schedule a game of Pitfall or two during the dull ones. 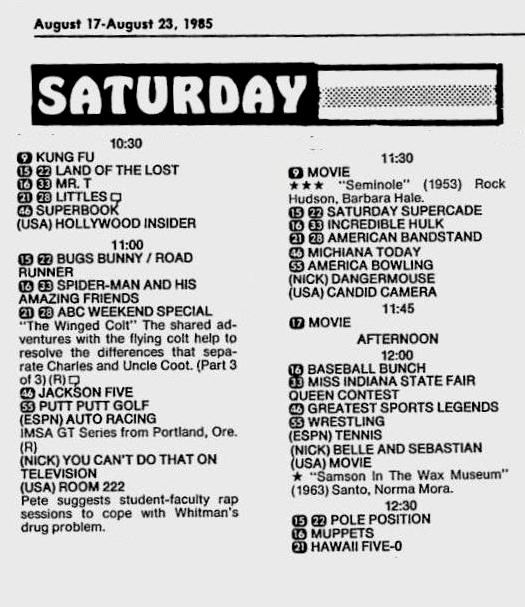 The morning would start to wind down by 10:30, and i would probably have to go cut the lawn or something soon. But if I was lucky, I would stay on the couch for a little longer. 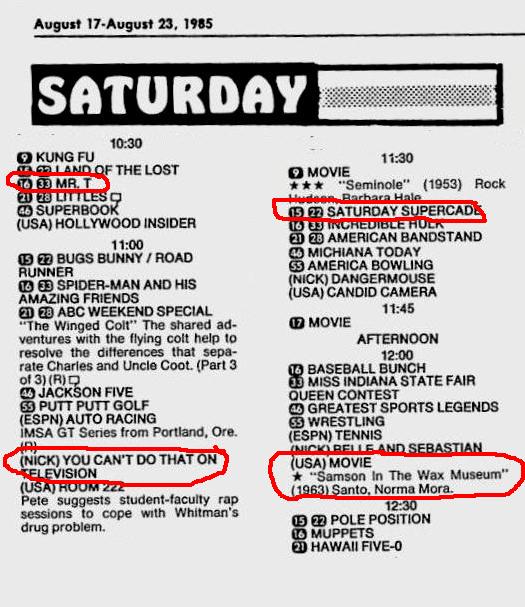 I had to see Mister T... the listing is wrong, BTW, the star was Mr. T, the cartoon was Mister T.

Then I would check out You Can't Do That On Television and hope Moose got slimed.

After that, Saturday Supercade! This was a cartoon with segments on Donkey Kong and Q-Bert and the like.

Then I would try and watch some of the Mexican wrestling film "Samson in the Wax Museum" where El Santo is inexplicitly called Samson.

And I would hope that Sunday was Softshell Sunday at my house. 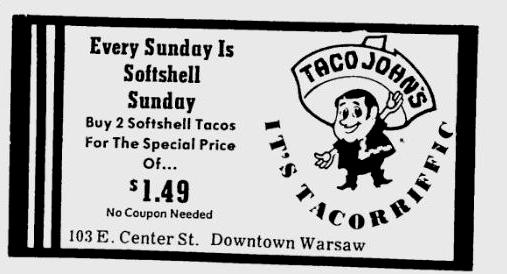 Me and my imaginary Indiana family couldn't resist the allure of Taco John's! It's TACORRIFFIC!
Posted by Guy Hutchinson at 10:45 AM 3 comments

What's Going On In This Picture? 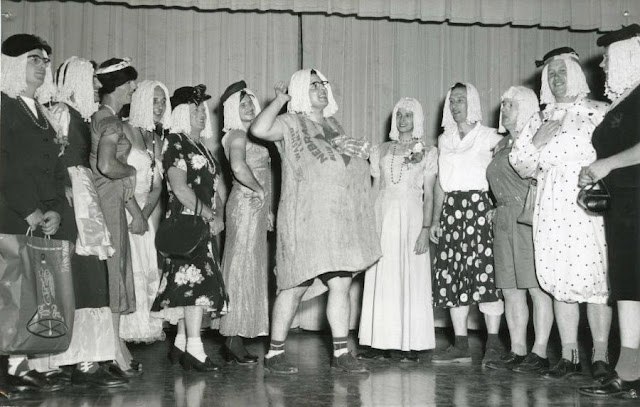 I have no idea.

I found this on eBay where many old photos are sold without any context provided. I guess people find 'em in drawers of distant relatives and put them up for auction. Here are some I have found lately: 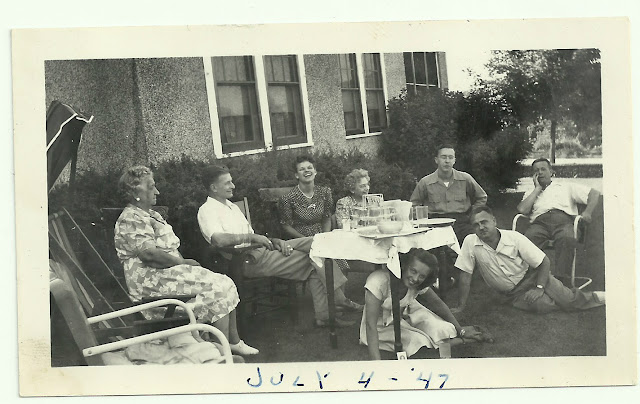 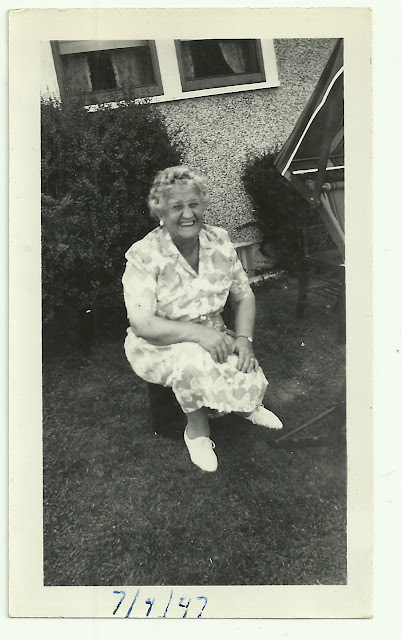 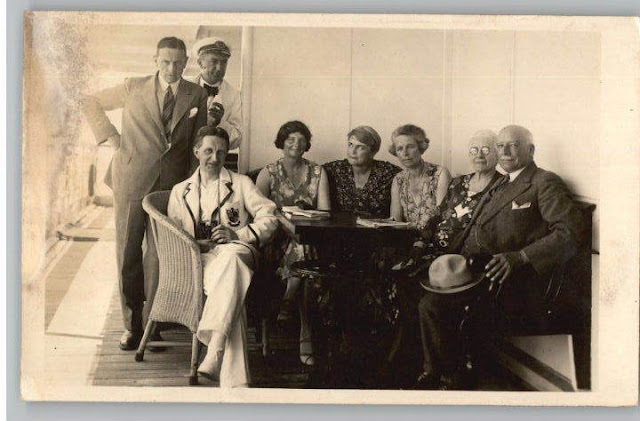 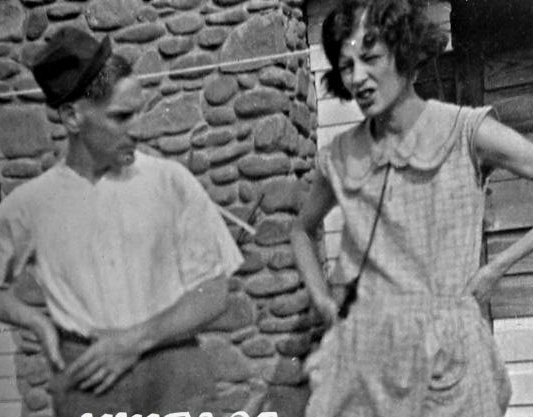 Posted by Guy Hutchinson at 10:00 AM 0 comments

What the Hell Did Jesse Jackson Say?

About 2 years ago I heard that Tim Conway Jr. was hosting a talk show in Los Angeles. Being a big fan of his dad I made sure to check him out.

The first time I listened Tim was doing this absurd bit called "What the Hell Did Jesse Jackson Say?". The joke was that Jesse often will drop words from his sentences and speak really, really fast when he gets on a roll. Callers would try and guess what he was saying and it's surprisingly hard.

Tim does this weekly and the other day I decided I would give it a shot. I did rather poorly. I compiled all the important parts into a YouTube clip:

Posted by Guy Hutchinson at 8:31 AM 0 comments 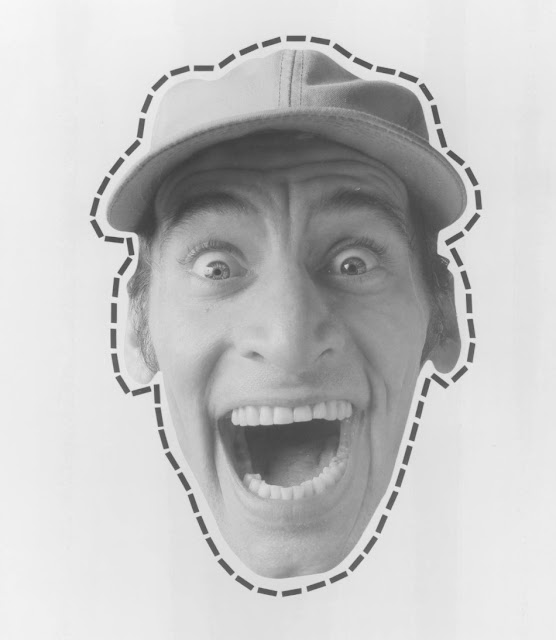 Now print it out and put it over your stupid face. Life will improve 100%.


Posted by Guy Hutchinson at 8:24 AM 6 comments