An afternoon with Mr. Roy Disney

Recently Mr. Freeze and I went to the Philadelphia for the an event to honor Roy Disney and showcase some Walt Disney cartoons.

The first event we were attending was called "Nine Decades of Disney Magic" and was being held at the Prince Music Theater, a 450 seat theater on Chestnut Street in Philadelphia.

There was a showing of Fantasia the night before, apparently with a live orchestra, but I missed that.

The tickets were $8 for the "Nine Decades" but they were selling them 2 for 1! The theater was at least half empty.

Thom Cardwell, the Festival's executive director came on stage first. This dude was awesome. It was like Charles Nelson Reilly and Paul Lynde got together and had a baby. Actually, I bet they did get together. And if "baby" is their code word for "hairy linebacker" they probably DID have one.

Please take a moment to stare at Thom's super-sweet jacket and ascot.

I MEAN HE CAME OUT ON STAGE. Get your mind out of the gutter Mr. Nelson Reilly.

Anyway, Maltin's beard looks... NO, NOT THAT TYPE OF BEARD.

Leonard Maltin is all about the "hot naked women" and don't you forget it.

Anyway, his beard is just fascinating in person. Well groomed, yet OUT OF CONTROL. I couldn't stop staring at it.

He said something (it might have been brilliant, but all I heard was "look at my beard! Become hypnotized by my beard!"

Maltin asked Roy a few questions and Roy told a little bit about his role in the animation boom in the 1980s and 1990s.

As he described the time period Roy said "...they had made a movie none of you have heard of called The Black Cauldron."

With a look of mock awe Roy quipped "Then why didn't you all go when it came out?"

If you don't remember The Black Cauldron, it's an interesting film that really announces "THIS WAS MADE IN THE 1980S" during every foot of film.

It's like someone took The Hobbit, Star Wars, Dungeon's and Dragons and the Smurfs and stuck them in a blender.

Then while they were all stuck in a blender, that someone went to Disney and made a movie. 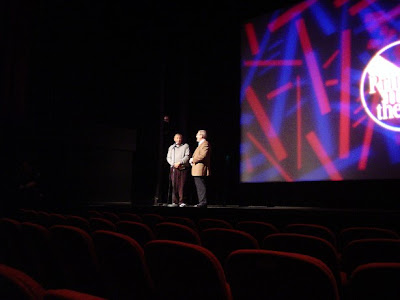 After speaking for a few minutes they gave a brief disclaimer for one of the cartoons we would be seeing, Der Fueher's Face.
See, in that toon, Donald Duck is a Nazi. Yup. No joke.

They walked off the stage and the lights went down and the shorts played on a rather large screen and on film!

The compilation of shorts featured:

1. Alice in Wonderful (1923): This was the famous Alice comedy where a live action girl was in an animated setting.
The print they showed did not have the last few seconds, which as I understand are lost (a new ending was manufactured a few years back.)
This was a whole lot of fun. All the animals were nice to Alice - except the Lions! Lions can be such jerks.

2. The Ocean Hop (1927): This was the first Disney directed Oswald the Lucky Rabbit cartoon I have ever seen.
The plot involved a plane race and featured a few gags that were re-used in Plane Crazy.
The villain of the cartoon was a bully with a peg leg... very Peg Leg Pete-esque.
In the cartoon Oswald used a dog as a plane, and used a "thought bubble" as a balloon.
It was very funny. I made a mental note to try to convert my neighbors dog into a bi-plane.

I SAID BI-PLANE! Please, everyone, get your minds out of the gutter!

Just sit back and drink in that man's sense of style.

3. The Brave Little Tailor (1938): It's Mickey as Giant Killer in this color short. The addition of color and sound was really impressive when you figure this was only 11 years removed from the previous Oswald cartoon!

4. Der Fuehrer's Face (1942) Donald Duck in full Nazi regalia seemed to make the crowd a bit uncomfortable (I think I heard a couple gasps.) The patriotic ending elicited some of the loudest applause of the program.

5. Toot Whistle Plunk and Boom (1953): A beautiful CinemaScope film that traces the history of musical instruments. It also implied that cavemen would play the drum by pounding their fists on their stomachs. Cavemen were so stupid.

6. It's Tough to be a Bird (1969): Interesting film, and at 21 minutes, it was one of the longest "shorts" of the program. This featured an animated bird who tells us how to take better care of birds. There were a few live action segments, one that briefly featured Ward Kimball as a birdwatcher and another that took us to Hinkley, Ohio where we see the annual Buzzard Day.

7. Winnie the Pooh and Tigger Too! (1974): Here we got a look at the short that later became part of the Many Adventures of Winnie the Pooh.
I hate Eeyore. I also hate that spell check wants to change his name to Eye Sore.

8. Red's Dream (1987): A rather dreary Pixar short about the sad life of a unicycle who wants to be a clown. This was fun to see again since I don't think this one has been attached to any of the Pixar theatrical films. I think I saw this a few years ago on a VHS collection of Pixar shorts, however.

9. Roller Coaster Rabbit (1990): A funny Roger Rabbit short that was once shown in theaters before Dick Tracy.

10. Destino (2003): A surreal short that was 58 years in the making and was the combined effort of Salvador Dali and Walt Disney. Very fun to watch. It was like being inside Snoop Dog's head.

The program ended at 4:33pm, I think it was later than expected because of the lengthy intro.

20 blocks away there was a Leonard Maltin hosted showcase of Silent Our Gang films. It started at 4:30pm and I had tickets. The executive director of the festival had even encouraged the audience to attend it when he introduced the "Nine Decades of Disney Magic."

So, a few minutes late we ventured into the subway system hoping to get there in time to catch a few shorts.

After waiting over 20 minutes for the train we decided to bail on the Little Rascals and headed up to Applebees to wait for the Roy Disney event.
At first it was a tough choice: wait for a train in a tunnel that smelled like urine or eat at Applebees.
Then I remembered there were no actual "bees" in the food at Applebees.

So I went to Applebees. The urine smell was still around and a for a moment I thought it was Freeze. I later realized it was Philadelphia.

At a few minutes after the scheduled 7:15 start Thom Cardwell came back on stage to introduce a clips package for Roy Disney who was being given the first ever "Inspiration Award" by the festival.

The clips package, titled "A Salute to Roy E. Disney" and was a rather lengthy showcase consisting of just about every animated film that Disney film ever made: Pinocchio, Peter Pan, Little Mermaid, Tarzan, Dumbo, Atlantis, Cinderella, Mulan, Black Cauldron, Emperor’s New Groove, etc, etc. After the clips, there were some interview clips that seemed to be off the DVDs for True Life Adventures and Fantasia 2000.

Then Roy walked onto the stage to accept the award and also said that he hoped we didn't think that he MADE all of those films, but he was "proud to be part of the family that did."

After the award was accepted, Roy sat down and was joined by Leonard Maltin.

For the next ten minutes Thom just wandered around the stage adjusting microphones as Roy and Leonard just stared at his jacket. 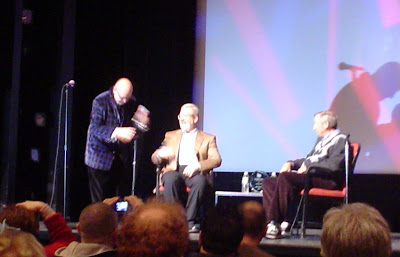 After some of the most FANTASTIC microphone adjusting of ALL TIME, Thom left the stage.

For the next hour Roy fielded questions from Maltin and from the audience. Some of the highlights were:

-Roy O. Disney used to share a bed with Walt (who was 8 years younger) and Walt would wet the bed. Roy E. said that this was one of his father's favorite stories. He would tell people that "Walt used to pee all over me," then after the laughter let up he would add "and he still does."
I was wondering if he was the one that peed in the subway, but I decided not to ask.

-Roy E. Disney wasn't interested in the entertainment industry as a child. He wanted to design airplanes. He later failed calculus and decided he wanted to become a pilot figuring "..if you flunk calculus you have to give up on designing airplanes."
Sure, but what if you designed the plane out of a frickin' dog!

-Walt refused to join the Board of Directors and wouldn't go to shareholder's meetings because he didn't want to answer to anyone. This caused a lot of fights between Walt and Roy O. Disney.

-When asked about Song of the South he said he has been trying to convince the studio to release it to art house theaters in hopes of making it more available. He called it a "wonderful movie" and said it "deserves to be in the public."
I am not sure that the public is ready for this. I am not even sure they were ready for Thom's jacket and planes made out of dogs.

-When asked about hand drawn animation vs. computer animation he said it was like trying to choose weather oil paintings or water color paintings were better.

-He and John Lassetter really value the concept of playing shorts before a film. There are currently 2 theatrical shorts in production including a Goofy cartoon entitled How to Assemble your Home Theater.

-His favorite film is Fantasia.

-He couldn't pick a favorite theme park ride, but really likes Soarin' at DCA. He said he would love to make a new film for that ride and has expressed interest in doing so.

It was a really fun day (even with the scheduling conflict with the Our Gang films.)

The final Disney program was held on Easter Sunday (I did not attend) and was to feature Disney Rarities. Maltin and Disney said they would be there for that as well.

I, on the other hand, spent Easter Sunday listening to a judge explain to me why I was no longer allowed near my neighbor's dog.
Posted by Guy Hutchinson at 12:09 PM 0 comments