The Board Games of Charlie McCarthy

When I was a youth I had a Charlie McCarthy ventriloquist toy. I received him for Christmas and although he was a bit of a disappointment (I had wanted Willie Tyler's dummy Lester) I soon learned to love Charlie.

Only knowing Charlie from his brief cameo in The Muppet Movie, I created a new personality for Charlie. Charlie would simply tell everyone that they smell.

Me: Hey Charlie would you like to meet my friend Chuey?
Charlie: Yes, but whooo he smells. He stinks.
Me: Charlie, that is not nice!
Charlie: You're right! It's not nice for him to come here smelling like that!

Yes, it was fun. Eventually Charlie was donated or discarded but a few years ago for Christmas I got another Charlie McCarthy. I gave him a Waffle House hat and name tag and put him in my kitchen.

Recently I received a few DVDs of Charlie and his ventriloquist Edgar Bergen. So, during a bout of Charlie fever I looked online to see if Charlie McCarthy ever had his own board game. I was please to find out he did. In fact he sort of had several. It all depends on what you classify as a board game.

Luckily, with eBay, I was able to get 5 different pre-WWII games for less than $20 each! Here they are: 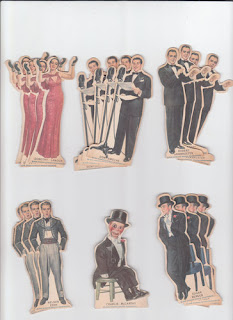 Charlie McCarthy's Radio Party
This is easily my favorite. It comes with a spinner and the cardboard cutouts shown above.
The purpose of the game is to collect one of each character including the elusive Charlie McCarthy. The characters include Don Ameche who played an old guy in several 1980s films including Cocoon.
The fun of the game is you keep getting a chance to snatch characters from your opponent. It's one of those fun games where you can be on the verge of victory and then suddenly you are losing.
It's not exactly a board game since... there is no game board.
This game was a mail away item. Mine came with the original envelope. 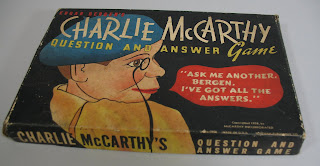 Charlie McCarthy's Question and Answer Game:
This one really stretches the boundaries of being called a 'board game' or a game at all.
It includes 2 decks of cards. One has Bergen's questions and the other has Charlie's answers. The questions are either puns or insults. Most play off the concept that Charlie is made of wood.
You shuffle the decks and one person plays Charlie and one plays Bergen. There are no points or score. It's sorta like an easier version of Mad Libs.

Example:
Bergen: I hear that your family is top shelf!
Charlie: You know one day Bergen, you will ask me a question you can't answer!

It seemed very disappointing at first... but I played the game with my niece (who would be the target age) and she loved it. Perhaps kids really like shouting insults even if they don't understand them. 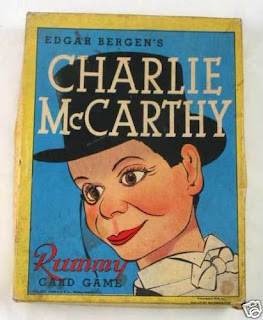 Charlie McCarthy Rummy:
A pretty standard Rummy card game... except you get to play with cards that are older than Al Pacino and smell like a basement. 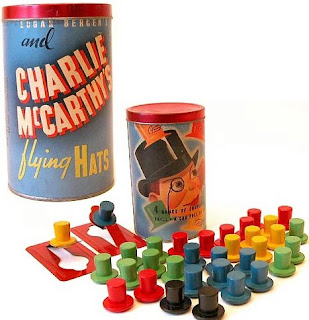 Charlie McCarthy's Flying Hats Game:
This one is also very simple. You get a bunch of wooden hats and some launchers and you shoot the hats into the can. Certainly fun, but you could have created this game yourself with a Carl's Jr. cup, a few sporks and a couple creamers. Or you could get the Double Guacamole Bacon Burger and some chili cheese fries. Man, I am pretty hungry. 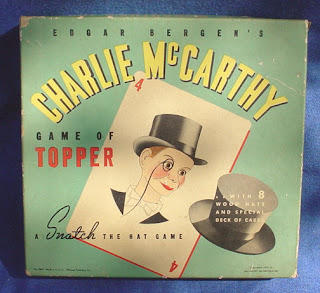 Charlie McCarthy's Game of Topper:
This one actually does have a game board... and a deck of cards... and some wooden hats. In theory it's the ultimate Charlie McCarthy game.

Still, I didn't find it as fun as the radio party game and I wasn't insulting or shooting things at anyone.

Conclusion: I bought some games on eBay, I bragged about them and Chuey smells.
Posted by Guy Hutchinson at 12:32 PM 4 comments

When we last left The Fat Spy... Dodo was meeting a mermaid.

Then it cuts to two Jack E. Leonard love scenes. One twin is romancing Mansfield, the other is with Phyllis Diller.

About 5 minutes into the clip is my favorite part. Jack E. Leonard sings the funniest song in the movie. It's about how ugly Phyllis Diller is.

But the mood of the film is getting darker... treachery is afoot.

But, not much. It's remarkable how little happened in this 10 minute clip.

This clip was so disappointing! When it starts, you think Diller is going to sing. Sadly, she doesn't.

Equally sadly, Mansfield belts out another tune. This time she is singing how she could be a Rose in Leonard's garden.

I rarely understand the lyrics to love songs. This one is pretty far out there.

Remember when Patrick Swayze sung "She's like the wind, through my trees?"

What was that about? It sounds vaguely dirty.

And remember when Phil Collins wrestled The Ultimate Warrior?

Yeah, that was awesome.

Posted by Guy Hutchinson at 8:53 AM 1 comments