A few years ago I attended a game at Pittsburgh's fantastic PNC Park.

Like any good consumer I made a stop at the concession and bought a few things. First was this: 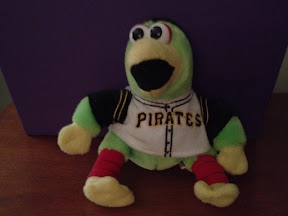 The Parrot is the second best mascot in MLB (after the Phillie Phanatic, obv.)

After grabbing the parrot in a giant bin of identical parrots I headed to the cashier... then something caught my eye.
At the bottom of that bin I could see something odd. It was a plush with a different green hue.
I reached in and dug until I unearthed this guy: 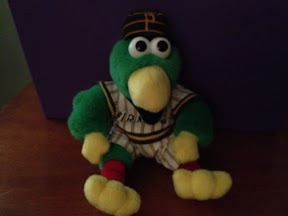 How long was he waiting? 5 years? 1000 years? Who knows. Now he gets to sit on the shelf near my desk. I like to pretend the two parrots are constantly chatting... one talking 2012 slang, the other talking like a late 1800s ball player.