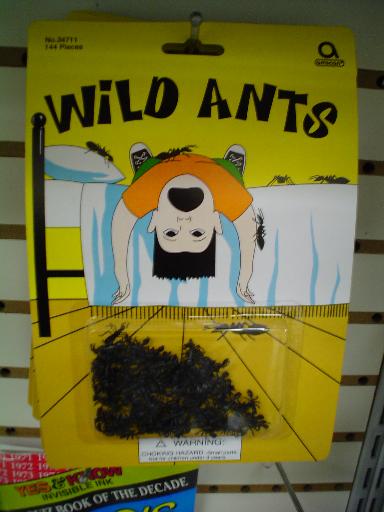 I am not sure the purpose of Wild Ants. My first impulse is "toy" but closer inspection points toward "torture device".

See how the giant ants roam free upon his lifeless body. See the look of shock/horror frozen on his face. He has become a victim of the Wild Ants.

I bring you his obituary:

Tommy Breybantz, was found dead yesterday in his parents Cansville home. Tommy had been walking through his room when he was attacked by Wild Ants. Tommy apparently fell backwards onto his bed snapping his neck. The Wild Ants then devoured him.
Tommy will be missed by the community for his skills at kickball and "burping the alphabet".
He is survived by his parents, but not for long. They will soon be Wild Ant food.

You know, it just dawned on me how silly the name Wild Ants is. Why "Wild"? Is that to differentiate these from other ants available on the market? 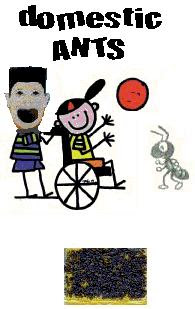 Wild Ants (by Al Yankovic, to the tune of Wild Thing by the Troggs)

Wild Ants
You killed Tommy Breybantz
You didn't give him a chance
Come on, Wild Ants

Inspired by Al's fine work, I decided to present my own Wild Ant's poem:

I live in fear of the Wild Ants
I hope they never get in my pants
I fear Wild Ants and hate them so
Just like any film starring Bronson Pinchot
Did you see that flick called "Second Sight?"
It was on cable the other night
Pinchot starred opposite John Larroquette
I watched half of it, I admit with regret
John played a detective, Bronson a Psychic
The screenplay was written by Patricia Resnick
I never heard of her before
But I shall remember her forevermore

I love Wild Ants.
Posted by Guy Hutchinson at 7:48 AM