On April 1st, 1998 Burger King ran a full page ad in the USA Today. The ad advertised the "Left-Handed Whopper". 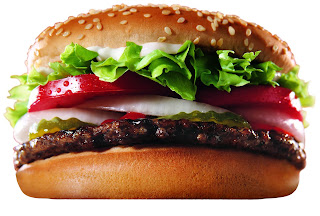 The sandwich didn't actually exist; it was just an April Fool's Day joke.

Taking a full page advertisement in USA Today as a joke was a very risky proposition. For starters, few of the people that purchase USA Today can actually read. Second thing, the ad was mocking both left-handers and anyone naive enough to fall for the hoax.

The hoax worked out to be a minor success, generating much more publicity than a usual ad would garner. The joke ad was covered by other media outlets including television stations, radio and other newspapers. I'm sure that USA today also did a pie chart of some kind the next day.

The ad said this new Whopper was made of the same ingredients as the regular Whopper: lettuce, tomato, artificial cow meat, etc.

The difference was that this Whopper "all condiments rotated 180 degrees, thereby redistributing the weight of the sandwich so that the bulk of the condiments will skew to the left, thereby reducing the amount of lettuce and other toppings from spilling out the right side of the burger."

Burger King's senior VP of marketing said "We have always been proud of the fact that we offered 1,024 ways to order our flagship WHOPPER sandwich. Now we are offering 1,025 ways. It's the ultimate 'HAVE IT YOUR WAY' for our left-handed customers,"

I doubted his claim of 1,024 ways and assumed that the claim was also part of the hoax. Instead I found that they DO have a list of 1,024 ways that you can order a Whopper. Here are some of the entries:

12. You can order it from a girl.
87. You can spit when you talk as you order it.
301. You can order it and then realize you forgot your wallet in the car and then ask them to wait for you.
478. You can order a Big Mac and then we the cashier tells you that McDonalds sells THAT sandwich you can say "OK, I will have a Whopper, then."

Yeah, you really get to have it YOUR way.

The next day Burger King put out a follow up ad explaining the prank. They also said that many people showed up at the restaurant looking for the sandwich. They also got some people ordering a "right handed version".

I think I found my TARGET AUDIENCE!
Posted by Guy Hutchinson at 9:15 AM