Something Queer is Going On 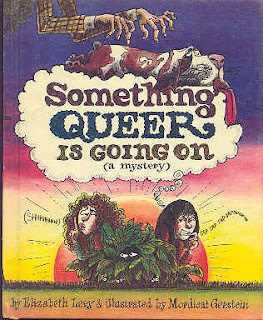 When I was a kid one of my favorite things was when we ordered books. The memory is a bit hazy, but I think every three or four months Scholastic would put out a catalogue and you could flip through it with your pals (during class time) and try and find a few books that you would like to read.

Usually the books were fun children's books with glossy covers and illustrations. The stuff kids love.

Then a few weeks later the teacher would open a big box and hand you your books.

I still remember the thrill of getting the new book and trying not to crease the spine as I read the book.

Then about ten minutes later I would give up on that pipe dream and curl the book up and stuff it in my back pocket.

I ordered some awesome books that way. Many of them I still have. Books like the novelization of Back to the Future II (where all the swear words were replaced with words like "jerk") and 'The Indian in the Cupboard' (oh how I laughed at the fact that they called the bathroom "toilet."

Lines like "I was in the toilet when my mom came home" just cracked me up.

Anyway, one of the books I got was called 'Something Queer is Going On' by Elizabeth Levy.

It's at this point that I wish to point out that I will not make any "queer" jokes. I am sure my younger self would be sad about that.

Instead I will misquote 'The Indian in the Cupboard' again:

"I went into the toilet to wash up for dinner."

The book tells the story of Jill a young girl who comes home to find her lazy dog Fletcher missing. So she and her pal Gwen start to look for him.

The book is full of unusual quirks: Gwen taps her braces when she thinks and Jill has problems with anxiety.

The book was funny. I read it again recently and I still think it worked.

The highlight of the book, however, was the illustrations. Done by a dude named Mordicai Gerstein. As a kid I found that name awsomely bizzare. As an adult I find it awesomely bizarre (I spell a little better now.

The illustrations were full of arrows pointing out details and there was a detailed diagram of the dog and how his spots resembled a map of the world.

I got my copy sometime in the 1980s, but I found out that the book was actually originally released in the early 1970s.

Anyway, after reading the book I found out that we were having an assembly. Wow, that sounds so stupid. Every presentation or show or concert at school was called an assembly.

I don't know if that is a regional thing or not, but it sounds funny.

Our assemblys (or is it assemblies? Maybe my spelling hasn't improved) always took place in the gym. A few hundred kids would gather in the gym and sit on the floor as someone did something, sang something or talked to us about something.

On that day we were getting a talk from Elizabeth Levy with Mordicai Gerstein. Looking back, I was pretty lucky. My favorite book was a book that was over a decade old and yet the author and illustrator came to my small town to talk to us about it.

I carried my beat up copy to the assembly with me and followed along as Ms. Levy read the book to us. Then they took questions.

I asked Mordicai if he traced the pictures. (Traced them from what I didn't know.) He politely answered my idiotic question. After the assembly they sold and autographed books.

I took my copy (which had small rips in the cover and a water stain on the pages (I hope it's water) and got them to sign it.

Mordicai even drew a cartoon of Fletcher, the dog from the book.

I am happy to say I still have the book.
Posted by Guy Hutchinson at 9:14 AM