Here is a wacky autograph I have: 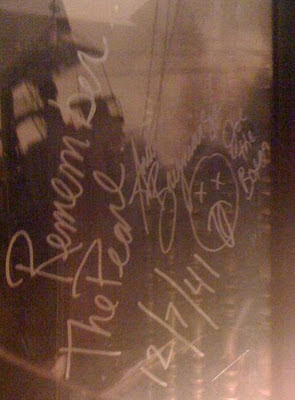 It's a closeup of a poster from Pearl Harbor shot in a dark room with a cheap camera. Sorry.

Anyway, I met Andrew Bryniarski at a horror convention where he was signing autographs in conjunction with his part as Leatherface in a new Texas Chainsaw flick.

All day long he was signing and drawing a dead happy face. After signing my poster he realized what he had done. "Crap! I just drew a dead face on a Pearl Harbor poster! Man, that's disrespectful!"

So Andrew wrote a bunch of stuff on it to hopefully soften the blow of his cartoon. He also told me stories of the making of Pearl Harbor. He teared up a bit.

Later he talked about playing Leatherface. He teared up then too.

I guess that's his thing... that and drawing little dead faces on Pearl Harbor posters.
Posted by Guy Hutchinson at 1:05 PM