No one wants Kevin Smith's pants

It's a pretty sad statement about the USA.

Theres like 300 million people in this country. I know this because there were about 25 cars in the parking lot of the local KFC last night. Since there are over 30,000 KFC's in the US that adds up to about 300 million.

And none of them want Kevin Smith's pants. 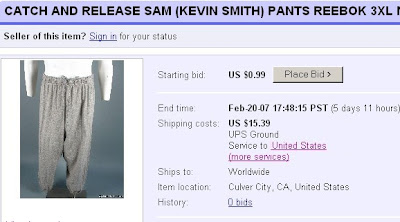 Reebok sweatpants worn by director Kevin Smith. You might know Kevin from his role as Silent Bob in the "Jay and Silent Bob" film series.

Maybe you recognize his name from some of the fine directorial work he has done on such films as Jersey Girl and the "Jay and Silent Bob" film series.

Or maybe you remember him as the sloppy guy in the morgue in Daredevil or maybe you saw the animated TV series clerks which was based on the "Jay and Silent Bob" film series.

Anyway, you probably know who he is.

But apparently you don't want his pants. Look at those fine pants. If that mannequin had hands he probably couldn't keep his hands off Kevin Smith's pants.

The eBay auction for the pants Smith wore in the recent Jennifer Garner romance flick Catch and Release reads thusly:

You are bidding on a 100% authentic item of movie memorabilia direct from COLUMBIA PICTURES season's hit film, "CATCH AND RELEASE".

You are bidding on PANTS worn by the character SAM (KEVIN SMITH) during production of this lovable film!

Don't hesitate or you might miss out! Good luck bidding and don't miss "CATCH AND RELEASE" in theaters now!

Heck, you should want these even if you don't know who Kevin Smith is and have never seen any of the films in the the "Jay and Silent Bob" film series (I don't know why, but that looks funny in print.)

Sure, they are huge. XXXL. That is more XL than most people want in thier pants... but think of the comfort. It will be like wearing a sleeping bag on each leg if you are a smaller person.

Plus, you could take them in with a safety pin or a sewing machine. 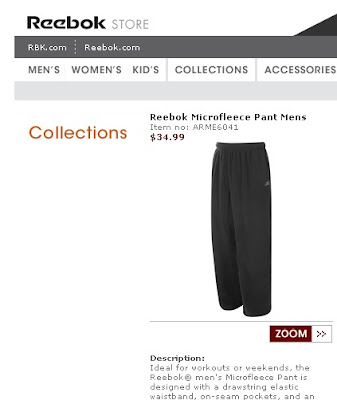 A pair of sweatpants NOT worn by Kevin Smith is worth $35. Can't someone pony up the 99 cents to buy ones worn by Kevin?

I know what you are thinking:

NOT EVERYTHING ON EBAY CAN GET BIDS.

Sure. This is true for stuff NOT worn by Kevin Smith like an instruction book on how to draw clowns... 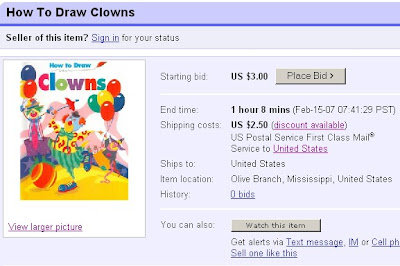 Or a pair of Jumbo Clown scissors... 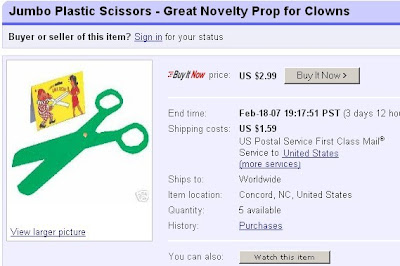 But even a squeaky toy clown gets bids... 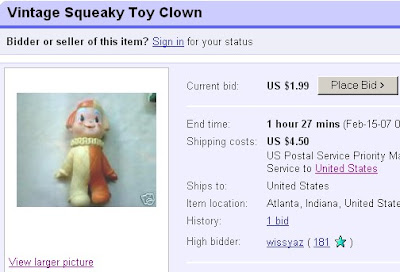 Is a squeaky toy clown worth TWICE as much as pants worn by Kevin Smith?

Let me take this from another perspective.

Let's say you like football... or pro wrestling. Or both. Then you will probably like the flick Gridiron Gang starring The Rock.

I liked it. I also like The Get-a-long Gang starring Rocky Raccoon. But I digress.

Anyway, here is an auction for The Rock's duds from that movie: 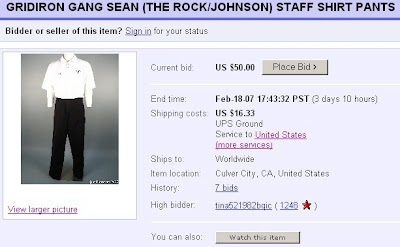 They are selling for about FIFTY TIMES what Kevin's pants AREN'T selling for. 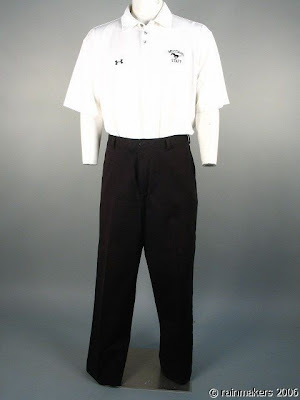 Don't be surprised if I outbid you.
Posted by Guy Hutchinson at 9:34 AM