When we last left The Goonies video Cyndi was trapped and Steven Spielberg wasn't able to help her.

And the announcer was talking in the goofiest voice ever (just ahead of Senator Joseph Lieberman!)

This video starts with the announcer's crazed description of the last video and then shows Cyndi and The Goonies on the ship in chains being held hostage. 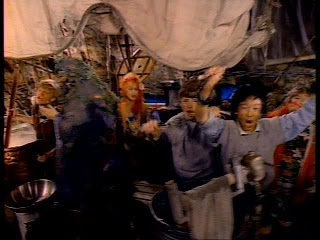 Then Cyndi's mom (who is dressed as some kind of sea hag) tells her to go overboard and get them some "sushi."

Cyndi goes overboard to see a deleted scene from the movie: 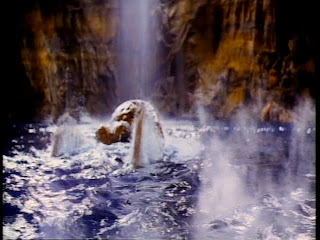 This octopus was deleted from the film (it appeared in some TV edits) and is in the deleted scenes section of the DVD.

It's a wonder they cut it out. It looks like a pretty good special effect. 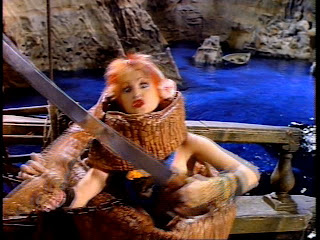 So, Cyndi slaughters an octopus on the ship. You would think they would have been INSTANTLY besieged by Greenpeace leading to an eventual rescue.

Ah well, no such luck. Cyndi is trapped on a ship being held against her will by Roddy Piper, Iron Sheik, Nikolia Volkoff and The Bangles. 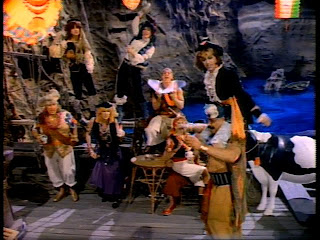 Wait a minute! Is that really The Bangles??!?? 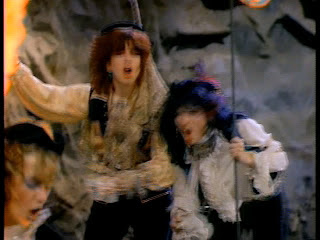 Good lord! It IS The Bangles! I must say I never thought I would see The Iron Sheik do-se-do with Susanna Hoffs.

This video reminds me of every dream I ever had when I was sick with the flu.

The Goonies eventually find a treasure chest full of cheap costume jewelry and toss it onto the bad guys. 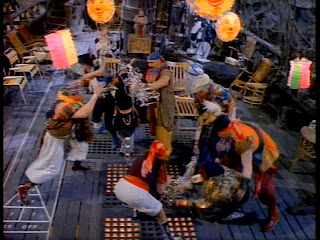 The bad guys (and The Bangles) take the jewelry and roll around on the deck of the ship allowing Cyndi and The Goonies to escape.

I can't imagine that Nicolai Volkoff has a greater moment in his career than the day he rolled around on The Goonies' ship with The Bangles. I know I would have it engraved on my tombstone. 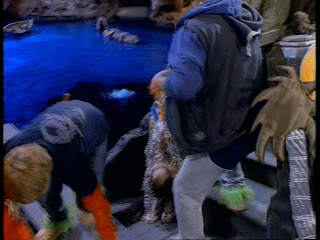 As The Goonies escape we see that they are all wearing matching slippers. These slippers were a short lived fad in the 1980s. They looked like feet with fuzzy green fur around them. You were supposed to paint the toenails all different colors if you were a girl.

None of The Goonies did so. I can imagine that "not painting the slipper's toenails" is at the top of Martha Plimpton's list of regrets.


After jumping off the ship Cyndi and friends come back through the wall of the gas station. 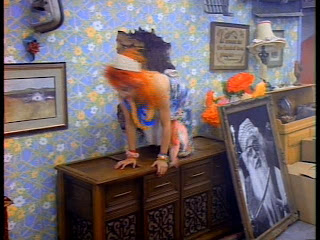 They leave The Goonies in the wall. Really! We never see them again.

Cyndi, Dave Wolf and Wendi Richter left them there to die.

They are almost as evil as The Bengals.

Speaking of evil, the bad guy wrestlers have taken full control of the gas station: 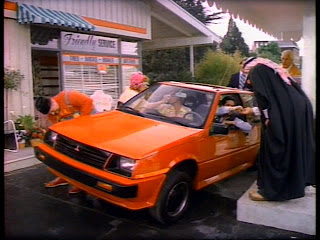 Sheik is taking care of the customer, Moolah is cleaning the windows and Volkoff is lifting the car up so he can check the tires.

They may be bad, but they run a good gas station.

Cyndi offers them jewelry in exchange for their overdue bills. 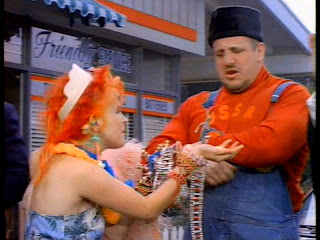 They refuse so Cyndi whistles and out of a cloud of smoke appears Andre the Giant. 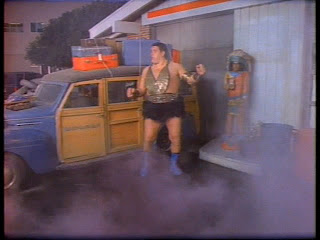 Wait a minute. Why didn't she whistle earlier? If she had Andre on standby, why didn't she just call him in the first place?

As the audience struggles to comprehend this, Andre starts bustin' heads.

After knocking out Sheik and Volkoff, Andre goes to grab Piper.

Piper, refusing to job- EVEN in a silly music video- starts yelling at Spielberg, Donner, Lauper and Wolf screaming "the video wasn't supposed to end like this!" 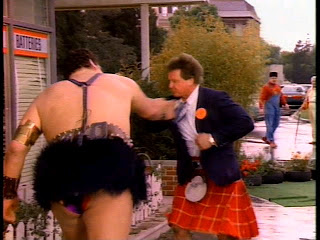 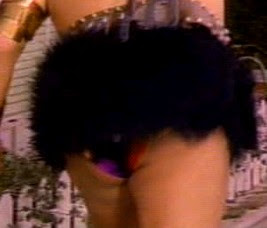 Yup. Try and get THAT image out of your head now, I dare you!

Piper then makes an attempt to carjack someone: 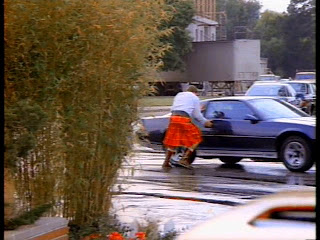 Then the video ends with Cyndi lifted high in the air and the announcer babbling like an infant. 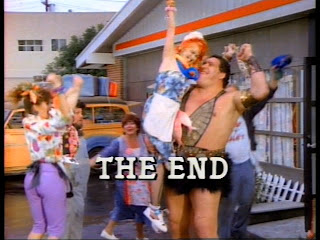 THE END
Posted by Guy Hutchinson at 9:03 AM