On last night's Adventure Club Podcast I performed a song I originally written here back in 2004.

It's a parody of Monster Mash all about the spinoffs of the TV series M*A*S*H. I try to sing it like Dracula, but I sound more like a cross between The Count from Sesame Street and and Italian Bela Lugosi.

You can hear the whole episode here, but I figured I would post just the song below: 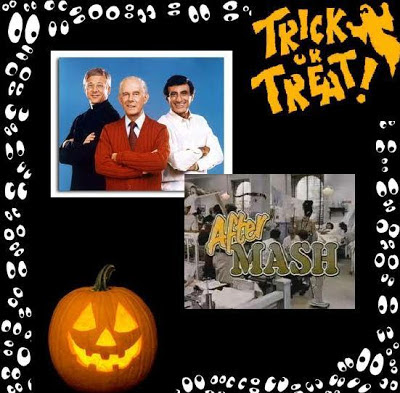 The Monster M*A*S*H
by Guy Hutchinson

I was watching M*A*S*H* late one night
When my eyes beheld an funny sight
from my funny bone, laughs began to rise
And suddenly to my surprise

Colonel Potter had tried to start a new life
Retired from the Army spending time with his wife
But it got boring sitting around day after day
So he applied for a job- at the V.A.

Sorta like M*A*S*H*
but this was AfterMASH
The AfterMASH
Before the ratings crashed
It was like M*A*S*H
They called it AfterMASH
I prefer M*A*S*H
But, I'll watch AfterMASH

Klinger was stuck, spent time in jail
Potter came along and posted bail
offered him a job and Father Mulcahy, too
and soon enough their careers were through

Around the country people started to shout
They didn't understand what AfterMASH was about
They looked at the screen and shook thier fists
And said, "Whatever happened to Alan Alda?"

He was on M*A*S*H*
but not on AfterMASH
Why not AfterMASH
He didn't need the cash
From AfterMASH
It went off the air in a flash
Not much else rhymes with M*A*S*H
So, I'll repeat AfterMASH

Soon it was over, AfterMASH was canned
but another spin off was about to land
this one too had ratings that would falter
it starred Gary Burghoff and was called W*A*L*T*E*R

Radar from M*A*S*H
This parody is redundant-mash
kind of stupid-mash
hasn't been funny for three stanzas-mash
should have stopped earlier-mash
oh God, make it stop-mash
what does this even have to do with Halloween-mash?
I think I'll go watch Trapper John MD