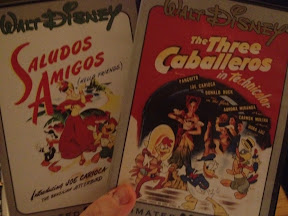 Both films feature Donald Duck and both took place in South America.

They were released in 1942 & 1944. Saludos is the shortest of the Disney Classics clocking in at 42 minutes.

It's a fun film with lots of live action travelogue sequences and a few shots of Walt Disney.

José Carioca is introduced in Saludos and then in Caballeros he and Donald are joined by Panchito Pistolas.

The highlight of Saludos. for me, is the Goofy sequence "El Gaucho Goofy". In this Goofy shows us how to live like a Gaucho which is explained to be the Latin American answer to cowboys.

Three Caballeros is a more standard animation running time of 70 minutes. My favorite scene is the finale "Donald's Surreal Reverie".

I like these films. I watch them more than most of the films on the "Disney Classics" list.

On can't really say why. It's most likely because they have a real "old time"  feel. Plus Donald Duck. I love Donald Duck.
Posted by Guy Hutchinson at 11:28 AM