I decided it was time to re-watch every one of the "Disney Animated Classics".

There are 51 of them, the newest being the 2011 film Winnie the Pooh (which is the only one I haven't seen yet.)

I don't have a deadline to finish these and I am still going to watch other movies when I feel like it.

The list of films is a bit weird when it comes to inclusions and exclusions. I ranted about that once on The Snydecast blog so I won't do it again.

Bottom line, watching these 51 flicks is a great way to see the history of the Disney studio unfold before your eyes.

That brings us to the first movie: Snow White and the Seven Dwarves. 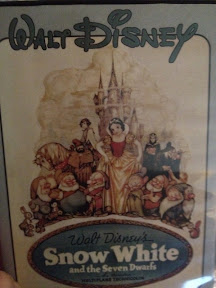 I watched it the other day and it really shows that they were top notch right out of the gate.

Some of my favorite parts involve the evil queen. Any movie that has a villain who wants the heroines heart (brought to her in a box) is tops with me.

The dwarves are delightful and Snow White's voice is wonderful on the ears.

Disney chose a classic story to make his first (but not the first... don't let Disney tell you otherwise) full length animated film.

The thing about these stories is that they had been told & retold over and over working out any kinks.

I would have to give this one a 7 on a scale of 7 dwarves. It's great.

Posted by Guy Hutchinson at 9:01 AM