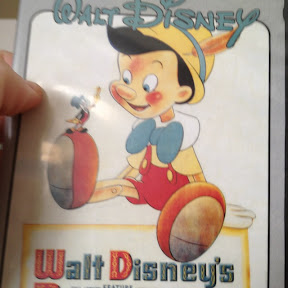 As the follow up to the ground breaking Snow White, Walt & company did the classic Italian tale Pinocchio. I'm sure you know the story.

Geppetto is, kind of, a weird character. He makes the puppet because he's lonely, then when Pinocchio comes to life he immediately sends him to school.

I assumed this was so he could wish for the blue fairy to bring him a supermodel.

My favorite scenes are on Pleasure Island. I would love to go to that place! Cigars, booze & fights! I don't care if they turned me into a donkey at the end. Fair trade off.

There are a whole bunch if villains in this flick. Stromboli the evil puppet master is a riot. For some reason he and Geppetto are the only people in Italy who have an Italian accent.

I wish Disneyland had a walk around costumed Stromboli. I also wish I had a stromboli or a calzone... or even a plate of microwaved pizza bagels.

Disneyland does have 2 of the other villains: Honest John & Gideon.

Honest John's full name is J. Worthington Foulfellow. His partner in crime, Gideon is referred to by John as "Giddy". Because of this, growing up, I thought his name was Kitty.

This made sense. He is a cat.

Anyway, thoroughly enjoyable, I give this film 4 long wooden noses with branches and a bird nest on the end.

Posted by Guy Hutchinson at 1:42 PM