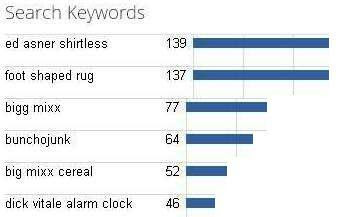 The above image is the top search terms that led people to this site.

If you Google "Ed Asner Shirtless"... and I mean with the website Google ya perv... this site is the top result.
We are the #1 source for all your shirtless ed asner needs.

The article in question is this: http://bunchojunk.blogspot.com/2006/08/vincent-j-mcmahon-and-shirtless-ed.html
Which reminds us that the tree most important moments in film history are:
Rhett Butler saying "Frankly Scarlett, I don't give a damn." The end of E. T. when Elliot told him "I do give a damn." and Vincent J. McMahon chatting with a shirtless Ed Asner. 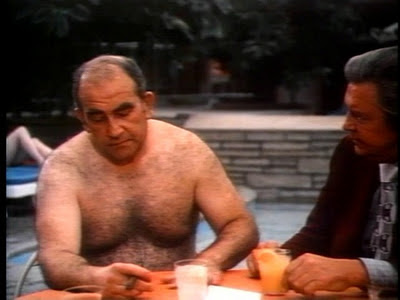 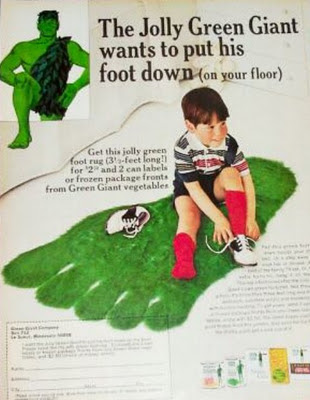 This search leads people to
http://bunchojunk.blogspot.com/2006/03/jolly-green-rug.html
Where we discovered the Jolly Green Giant rug!
Think how jealous the neighbors would be! Plus, when the sad day comes that the family pooch dies, stick him under the rug and tell people: "Fido was squashed by the Jolly Green Giant." 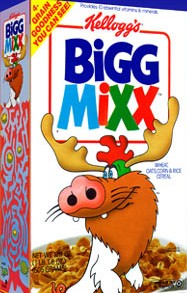 Glad to see this website is keeping the spirit of Bigg Mixx alive into 2012.
http://bunchojunk.blogspot.com/2005/12/bigg-mixx.html

This article talked about a 1990s cereal Kelloggs claimed was "swept off the floor".

This swept off the floor thing is no joke either. That seems to have been the marketing. Remember, cereal is sold to kids who are, by nature, filthy disgusting creatures and the early 1990s was a time of edginess.
Alternative rock, independent movies and unsanitary cereal. It was a golden age of edginess.

#4. Bunchojunk
Oh yeah. That makes sense.
I must confess when I bought this url I was amazed no one had swept it up. It seemed like a pretty catchy name. I assumed it would eventually be the name of a Jim Carrey film and I would get millions of dollars for the URL.
I also assumed we would all have wheels for feet by 2011. 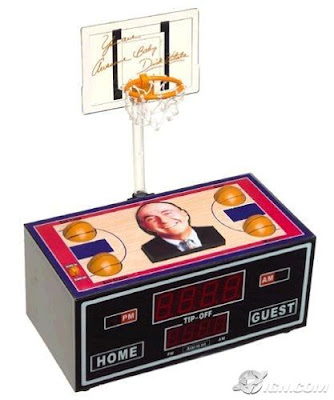 This search will lead you here: http://bunchojunk.blogspot.com/2005/01/dick-vitale-alarm-clock-its-awesome.html
And, yes, I am still using this clock every day almost 7 years after this post was written.
So me and Dick Vitale's wife have something in common. We both get to wake up every morning to the sound of his voice.
It's awesome, baby.
Posted by Guy Hutchinson at 3:16 PM