The Easter Bunny and Big Bird 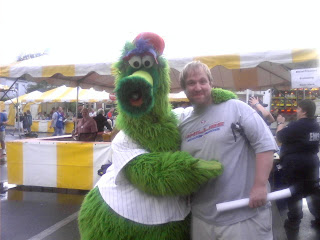 If you know me at all, you probably know my love of costumed characters.
Whenever I hear that one is in my area I make sure to snap a photo of it... usually with me standing next to the character.

And the more obscure the better. Sure, I get my picture with Mickey and Goofy when I go to Disneyland, but it's even more exciting to get a picture with Sunny Supersaurus at Super Fresh: 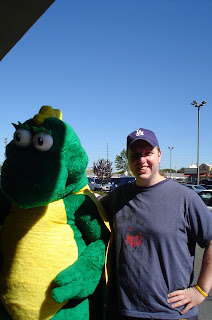 I am not sure WHY I like it. I rarely interact with the big muppet. I usually just take the picture and say thank you. Usually if they speak I find it mildly disturbing.

Perhaps it's just the collection of photos that makes it exciting. 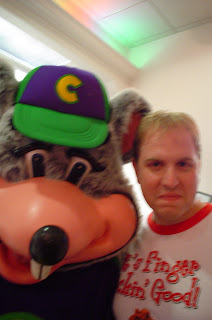 That could be it. I do have several framed photos of me and costumed people mixed in among my photos of me with celebrities.

And after spending 10 minutes on Wikipedia reading about people who are sexually attracted to costumed characters I am both nauseated and convinced I am not one of them.

Nope, I don't even want to hold hands and walk on the beach with them. 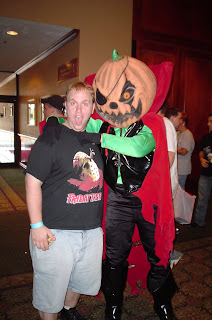 I just want to get a photo with them.

Perhaps it brings back some kind of childhood memories. Maybe it takes me back to a younger age and a simpler time.

But I have some evidence against that: 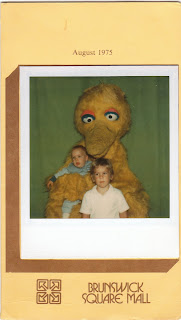 Big Bird. That's me (the baby) with some horrible bloated and beaten Big Bird. The picture was taken at the Brunswick Square Mall which was really far from my childhood home. My mom doesn't remember the day the photo was taken, but she must have been disappointed.

I was too young to know better, but my older brother brother seems unimpressed by Big Bird. Ugh. He looks Big Bird if he had a peanut allergy and had just taken a Nutrageous bar intraveniously... and if he was really filthy and had a droopy eye.

During my youth I also met this thing: 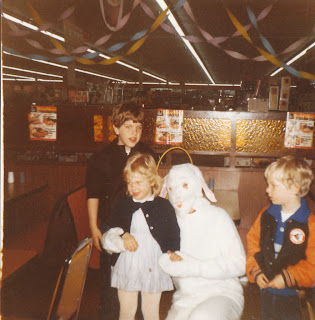 That's the Easter Bunny. I am the one in the black. My sister seems happy, but my younger brother and I seem a bit confused.

He looks like a q-tip that was used to clean a pencil sharpener.
Posted by Guy Hutchinson at 11:30 AM