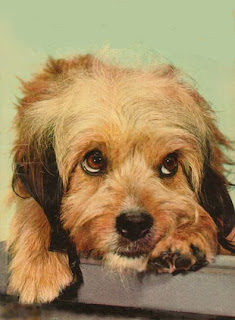 I have been watching a lot of Benji lately. I had always had a soft spot for the floppy mutt, but after watching Oh Heavenly Dog a few weeks ago I have been going a bit Benji crazy.

For those that don't know, Benji was a character in a hugely successful series of films, TV shows, TV specials, books, board games, records, Viewmaster reels, etc, etc, etc. Benji was everywhere for much of the 1970s and 1980s. 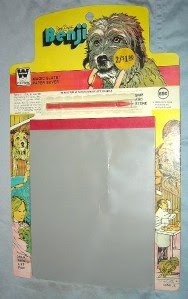 Over the course of the films Benji has been played by 3 or 4 dogs depending on who you ask (the 3rd Benji never appeared on TV or in movies.)

Most recently Benji appeared theatrically in 2004's Benji Off The Leash.

There is an absurd amount of Benji info to digest, but I will do my best to throw as much info at you as possible in a completely non-linear fashion that you will probably not be able to retain at all.

Benji had a game on the Commodore 64 computer. 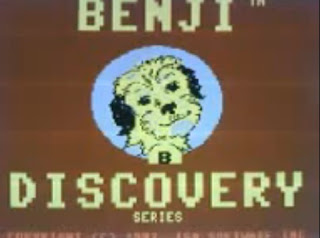 Benji was created by Joe Camp who has directed every single appearance as far as I can tell.

The series started with the film Benji in 1974. It was a well made dramatic film that tells of a kidnapping case that was solved by a stray dog named... you guessed it... Puddles.

Then Puddles lets fame go to his head and soon turns to the bottle. What dog can help him? You guessed it... WWE's Road Dogg Jesse James. He teaches him how to walk the straight and narrow as they work for Jeff Jarrett.

Soon Jarrett double crosses them both and Puddles meeets... yep... Benji. Benji Gregory, the kid from Alf. Is this funny to anyone but me? Probably not.

Anyway, in the real movie Benji (the dog) foils the crime. The film is a lot less "awww" and more "awesome!" (I should put that on a T-shirt.)

The film doesn't talk down to the audience and really doesn't even play as a kid's film. It's really great. The dog was played by Higgins, who was also the dog in Petticoat Junction.

The second film is For the Love of Benji which I haven't seen yet. I may have seen it as a kid, but I don't recall. I just picked it up as part of a discount box set in a Wal-Mart bin. This film (and everything else until Off the Leash starred Higgins' daughter Benjean. 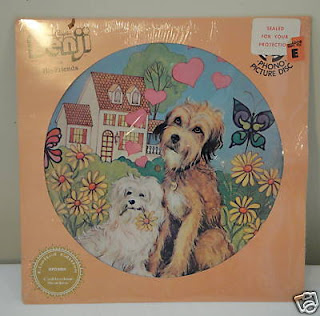 Along with the feature films Benji did a number of TV specials. One showed him taking a "dive" at Marineland.

I thought that he was going to let Stallone score a KO over him in a big fish tank, but that wasn't the type of "dive" he did.

This special was really unusual. It took place at Marineland Florida (which is a much smaller, and older, version of Sea World.)

The plot involved a bunch of puppets who were all either promoting Benji, trying to sabotage Benji or trying to put the moves on Benji.

The puppets get more screen time than Benji does. The dive in question is actually scuba diving. Yep, they put the dog in a special suit and he scuba dives. It's awesome.

Joe Camp also extended Benji's fame beyond the boundaries of children's entertainment. According to Joe's site Benji had a photo spread in Playgirl. I have not seen it... and I don't dare do a Google image search for "Benji in Playgirl" I assume there have been many dudes named Benji in Playgirl over the years.

Here is what Joe's site says about the Playgirl photos:

Benji is the only canine actor to ever appear as a centerfold in Playgirl Magazine. When asked if such an appearance isn't a break from his usual family-friendly philosophy, Joe says, "The way we looked at it was that in addition to being ridiculously funny, Benji's centerfold meant one less naked man on the magazine racks... because, you see, the dog playing Benji at that time was actually a girl." Would he do it again? "No."

Oh Heavenly Dog was also a bit more "adult" than most of the Benji projects. This time Benji got second billing to Chevy Chase as Chase plays a murdered womanizer who returns to earth as Benji to solve his own murder. The jokes are a bit off color and a few mild swear words are thrown about. As far as I have seen, this is the only film that Benji "talks" in (we hear Chevy's thoughts when he is in the body of the dog.)

It's kind of a shame because I do like talkin' doggie flicks. Also, there has never been any animated Benji adventures. There have been several illustrated books and lots of merchandise with artistic renderings of Benji, but no actual TV or film animated adaptations. 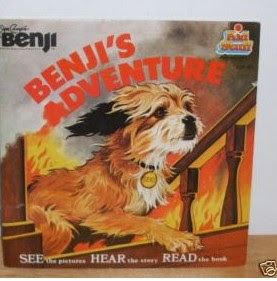 In the late 1980s Joe teamed up with the Disney company to produce Benji The Hunted. In this film Benji survives a shipwreck and ends up on an island and gets stuck caring for some orphaned baby mountain lions. This film has almost no dialogue since humans rarely appear in the film and it's not one of those talkin' doggie flicks I love so much.

Benji also had a Christmas special that I watched a few years back. In it he went to Iceland or Sweden or someplace that I was pretty sure I wouldn't want to go to.

In the special he meets Santa, but I think they tell you it's just an actor playing Santa.

I am not 100% sure it wasn't the North Pole. While I am confessing, I might mention that I am not sure Benji The Hunted took place on an island (not a Peninsula) and I did Google "Benji in Playgirl." Not recommended.

All of this scratches the surface of the Benji world, but there is still much more. 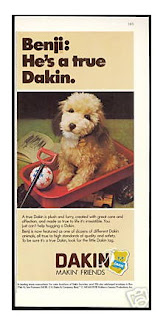 Benji had a TV series for a few years called Benji, Zax and the Alien Prince.

In this a young boy (who is an alien Prince) crash lands on Earth with his robot who looks like a cross between C3PO, Wall-e and a dreidel.

Only Benji can protect them from some angry mob of alien monks.

I know you think I am making it up, but it is really true.


Anyway, I have been watching Benji as much as possible lately. I ordered the board game and a plush toy and I should have enough VHS and DVDs of the pooch to keep me busy for weeks to come.

Then some other flight of fancy will strike and I will be obsessed with the San Diego Chicken, Outback Jack or The Civil War.