I love the Atari. I have one in my living room. A classic faux wood grain Atari 2600 and a pile of games. What I like about it (other than the sheer nostalgia) is the simplicity of the games. 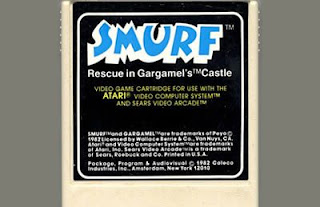 Smurfs: Rescue in Gargamel's Castle. You know I don't think I ever noticed the subtitle before.

The plot is: you are a Smurf and you have to perform a rescue in Gargamel's castle.

That's pretty much it. 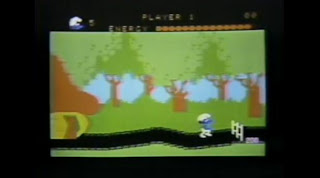 First thing that you need to learn in this game is hopping. This game has more hops in it than a case of Miller Light. Wait, let me check on that...


I just read some long winded message board babble about how Miller Light claims to have "Triple Hops" but the message board people think it has no hops.

I don't know what a hop is and I don't wanna bother checking... although Drunk Atari would be an awesome name for my new Ska band.

Anyway, the point is... you have to push up twice to hop and you must hop constantly in this game. See that fence? Gotta hop it. If you try and walk into it YOU DIE.

I don't get it. Was the fence made of small pox? How the hell does it kill you? You are only walking into it.

Plus, this must be a Smurf made fence. Smurfs are only 3 apples high (don't ask how I know that) so if it was a real fence even Anthony Hopkins couldn't 'hop' it.

That wasn't a stupid joke based solely on Hopkins' name. I heard that during the making of Remains of the Day he took a skipping start and hopped over Merchant and Ivory.

And why would a Smurf built fence out of small pox? It defies logic. 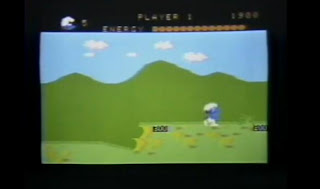 Keep hopping. Gotta hop up the cliff. I just hop the whole game. Why bother walking? 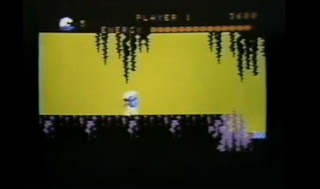 Now you hop down a cliff. AND YOU HAVE TO HOP. If you step off your legs crumble under you. It's awful. 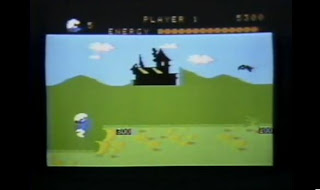 Finally we have hopped our way to Gargamel's castle! But first we must hop past it and hop over a river. Careful We have to hop over snakes, but hop under birds.

Also, what kind of bird is THAT small next to a Smurf. I don't think this really happened. It must have been made up by the game programmer. 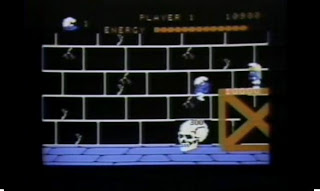 Somehow once you walk PAST Gargamel's you enter his castle. He isn't home, but you still have to rescue Smurfette.

So, hop past the spider and hop up to her.

Then you can do it all over again, but they do silly things like make you do each screen many times in a row, or add lots of birds.

I give it four stars... out of how many stars? You will never know.

Here is the original commercial for the game:

Posted by Guy Hutchinson at 2:50 PM