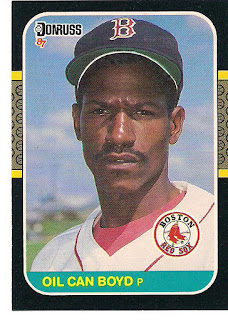 In 1986 Oil Can Boyd was one of the top pitchers in baseball. By mid-July he had 11 wins, but was left off the All-Star team.

So, Boyd threw a highly publicized tantrum that got him suspended from the team and landed him in a hospital psychiatric ward.

You may remember Oil Can, he played in the major leagues for 9 years from 1982-1991. To put that in perspective if you had a nickel for every year he played you could call me from a payphone and tell me how stupid that analogy.
Then you could probably explain the word 'analogy' to me and tell me if that ACTUALLY was an analogy.

The nickname 'Oil Can' comes from his Mississippi hometown, where beer is called oil. Odd, isn't it.

If you ever go to Mississippi and ask me for beer-battered chicken fried in oil, I would have no idea what to give you. I would probably shout "hey look! It's Clive Barker," and point behind you. Then when you turned back around I would be gone.

I'm sneaky like that.
Oil Can was one of 14 children of Negro Leaguer Willie James Boyd. Willie James was called 'Willie James' because that is what they called 'non-fat yogurt' in HIS Mississippi hometown.

Throughout his career, Oil Can was plagued by a hot temper and persistent shoulder problems. Boyd was one of the AL's top starting pitchers in 1985. A year later he was SUPPOSED to start the first game of the World Series. The game was postponed because of rain, and another pitcher started the first game. Boyd threw a tantrum an alienated himself from many of the other Red Sox players.

Oil Can was traded to the Montreal Expos in 1991, and in 1992 he played for the Texas Rangers. Too bad he wasn't traded to Walker, Texas Ranger.

WALKER: You just shot an unarmed man.
OIL CAN: Well, he should have armed himself, after not voting me onto the All Star team.
WALKER: Hey, why are we doing dialogue from the movie The Unforgiven?
ME: Sorry, I never saw this show.
OIL CAN: Me neither, except for the episode with Rowdy Roddy Piper.
ME: Oh, yeah! I saw that one. But, I don't remember any dialogue from it.
WALKER(sobbing): I'll be in my trailer.

In 1993 Oil Can resurfaced, when he threatened to sue the Red Sox for not inviting him to spring training.
Two years later, when the 1995 season was about to open with replacement players. Boyd was planning on crossing picket lines to play for the White Sox.

Throughout his colorful career, Boyd always did things his way.

So, the next time you pop open a can of oil, toast it to Dennis Boyd. Then pour it into your car or drink it (depending on whether you are in Mississippi or not.
Posted by Guy Hutchinson at 11:00 AM