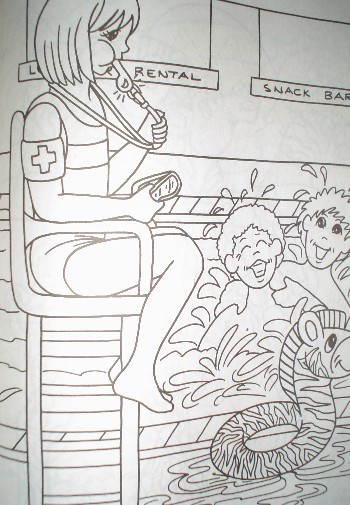 Ahh, the swimming pool. I wish I was there.

The kids in the pool are engaging in horseplay or rough housing. I can't tell which just from a still shot. Either way the lifeguard doesn't like it. She is primed to blow the whistle. She is SO ready that her cheeks have swollen to Dizzy Gillespie proportions.

She is also holding Milk's sunglasses, so either he's swimming elsewhere or the lifeguard is a thief.
I am voting on him being IN the pool since she appears to dumb to be a thief.

Don't believe me? Look at where her chair is located. She has her BACK to half the pool. (Oddly enough, this was from different coloring book than "milk".)

In the background there is a snack bar and a sign that says "L______R RENTAL." Probably "locker" but I am going to pretend it says "liquor." After all you never buy it, you only rent it.