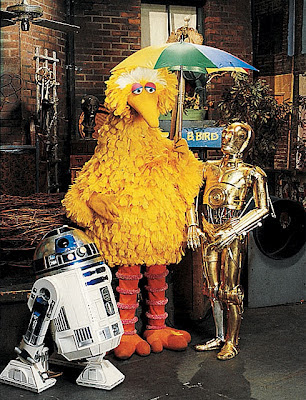 This was truly an epic meeting! Big Bird and C3PO together on the same screen! Not since Pacino and De Niro in The Godfather had such a thing been... ah... whatever. 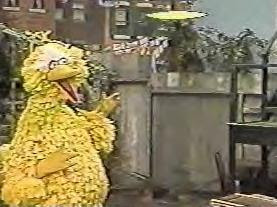 The show starts off with Big Bird spotting a glowing orb in the sky. Clearly Lucas had nothing to do with the effects here.

I assume one day he will redo this will a CGI spaceship and a motion capture Big Bird.

The episode featured the standard Sesame Street vignettes of the day with an ongoing story of R2D2 delivering a message to Oscar the Grouch.
A full write up can be found here.

A few months later they returned. Since the budget for the year had been used up on the floating orb they arrived in a bus: 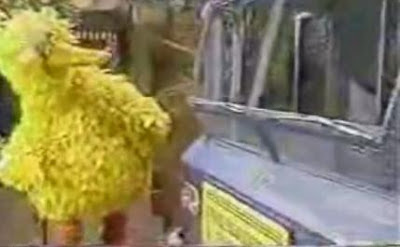 I am pretty sure there is something in Dianetics about robots arriving from outer space in buses. I can only imagine this was put in the show because Snufalupagus is a hard core scientologist. 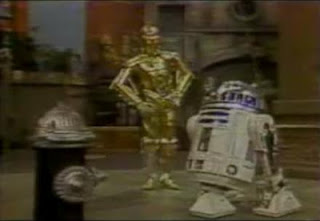 R2D2 fell in love with a fire hydrant.Yep. He's an sophisticated robot and he thinks fire hydrants are too. Hey look "are too" like R2! Ha!

Yes, I am a sophisticated person and I think "are too" was funny.

You can read about the second episode here

Sadly, the full episode isn't online, but you can see a couple clips below: