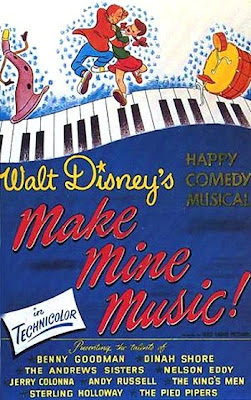 This is another one of those "package films" where a bunch of shorts are put together in... a... package.

This is a bit on the dull side. Pretty to look at and the music is good, but it really doesn't start the film off with a bang.

Oddly the film was supposed to start off with a bang: with The Martins and the Coys:


If ya saw this film in theaters this hillbilly hootenanny would have started things off. For some reason (likely the booze and gun play) this was cut from the DVD. Too bad. It's fun in a Tom and Jerry way and really would have set a different tone to start this off.

Next after Blue Bayou was All the Cats Join In:


This short was sexy! Take a look at the screen caps: 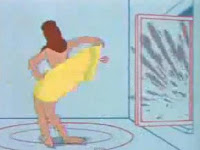 
Next is Without You


I would have called this boring a few minutes ago but I think I get the idea of this film, now. We go from upbeat to relaxing. It's fun!

Casey at the Bat is next. Home run!


This means of course we have a snoozefest next. It's called Two Silhouettes:

Next we get one of my favorites! Peter and the Wolf:


I had the book/record of this when I was a kid. It changed me. To this day I still wait for chimes to turn a page.


After You've Gone is next. Even the title is boring:


Next is the delightful Johnny Fedora and Alice Blue Bonnet  about hats in love:


Finally we get Willie The Operatic Whale which combines the silliness of 1/2 of the shorts with the somberness of the other half.


It's a fun movie and easy to watch. But it doesn't need to be watched as a feature at all. You could certainly break this up and watch whichever short you like at any time. I would not say the same thing about Saludos Amigos or Fantasia.

So, I give it five yawns out of a possible five. Yawns are good in this scenario, btw.
Posted by Guy Hutchinson at 4:21 PM