A few years ago I was a member of some kind of the New York Film Symposium. That probably isn't the real name, but it wasn't memorable.

All we did was watch movies. We would see films a few weeks before they were released and then discuss them. SOME of them were really cool, but most were as bizarre and unnecessary as that song about "Herbert Hoover" in the musical Annie.

99% if the people in the symposium were stuck up, self righteous fans of anything unusual. 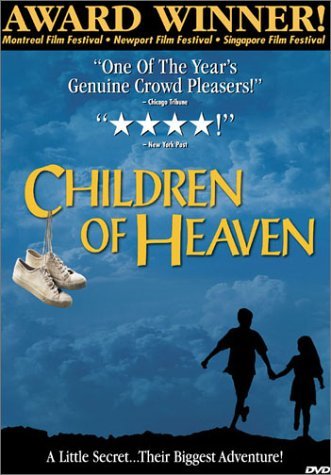 They loved Children of Heaven.

Children of Heaven told the story of two children growing up in Iran. Their family was very poor. I think they had a house with walls made of cloth. So did their neighbors. Whenever they showed the village they lived in it looked like a big laundry hamper.


The story was about two kids Zahre and Ali. Ali was the older brother and Zahre was a wisecracking robot.

No, Zahre was a little girl. Not even a cameo by The Iron Sheik could have saved this film.

Zahre and Ali lived with their parents and a chicken in this odd laundry tent. They had an old black and white TV that seemed to be painted red. They had no walls, but they had TV.

At some point towards the beginning of the film Ali looses Zahre's shoes.

In any other film this would just be a wardrobe problem. In Children of Heaven it's THE central conflict of the story.

Yup, it’s a film about lost shoes. A plot so thin that "Sesame Street" would have rejected it. And THEY once did an episode where Elmo and Baby Bear took turns trying on a hat. Still, I bet THEY would pass on "A girl needs shoes."

Because they are poor, the children are afraid to tell dad that they lost the shoes. See, even poor kids in Iran often are unable to speak openly and honestly with their parents. It's a small world, after all. It’s the circle of life. We are the world. Do they know its Christmas time? I'm not gonna pay a lot for this muffler. Blah blah blah.

So, they shared the shoes.

The next 2 hours consisted of kids switching shoes.

Ali would wear the shoes someplace and then run home to give them to Zahre to wear to someplace else.

None of these places are interesting.

Also the kids seem to spend a bunch of time jumping over puddles. They didn't want to get the shoes wet.

It's all about the shoes, man.

The film ends with a foot race that features a pair of shoes as first prize.

It was the Iranian version of "The Brady Bunch."

Still, as dopey as this film was THE SYMPOSIUM PEOPLE LOVED IT!

They praised the simplicity of the quest for shoes. They were clamoring for more. If any Iranian with $50 and a video camera had made a sequel about Zahre sharing a sock with Ali, these people would have loved that too.

I was bored by Children of Heaven. I'm sure this revelation will make those from the symposium think I am "uncultured swine."

So what? I think they have a foot fetish.