It may be the greatest film of all time. 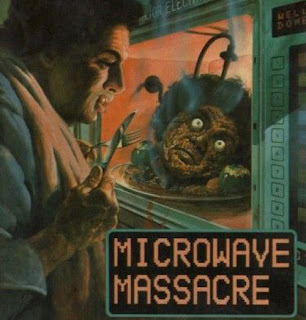 Microwave Massacre stars Jackie Vernon. Jackie's most famous role was of the voice of Frosty in the famous "Frosty the Snowman" TV special.

Remember that jolly voice that said "Happy Birthday" when he came to life? Now imagine that voice saying "if you scream I will cut you from ear to ear." The film was released in 1983 and played to the public's fascination with a brand new invention of the microwave.

The film tells the story of a man who hates his wife and so he kills her. The main reason he hated her is because she couldn't cook. So after killing her he eats her.

The film is full of shlocky gore. In fact at least every other scene features Jackie licking food dye and karo syrup blood off a rubber hand.

After eating his wife, our hero begins to kill prostitutes and eat them.

Sure, if that is all that happened Microwave Massacre would still be an awesome film. But there is more, much more.

The film is funny. Often in the most cornball of ways, but definitely funny.

Absurd out of place props are in abundance throughout the film and the dialogue features many groan inducing puns and jokes.

One example of the dialogue is:

Jackie: I have to go to Chinatown tonight. I want to pick up some Peking chick.
Someone else: Don't you mean Peking duck?
Jackie: No, Peking chick!

Get it? He is picking up a girl from Peking. He calls her a "chick." Calling her a duck would just be silly.

Still not laughing? At one point the Peking chick dons a chicken suit.

Also, his wife's head seems to live on inside the fridge to torment him and at the end she gets her revenge. What a great film. 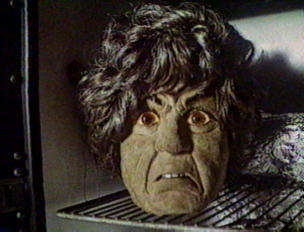 The reason I bought this tape was the video box:

At first glance it just looks like another film starring Nathan Lane as a chef.

Closer inspection finds a woman in a microwave and more importantly a "push to start" button.

Press it and nothing happens. Go to the drug store and buy two watch batteries that cost $5 ($3 more than the tape itself) and press the button and it buzzes.

I guess that is the sound we associate with microwaves. Also two lights (one red and one green) blink intermittently.

The greatest joys in life may very well be the little things.