There was once a doomed baseball franchise in Seattle that only lasted 6 months. SIX MONTHS. 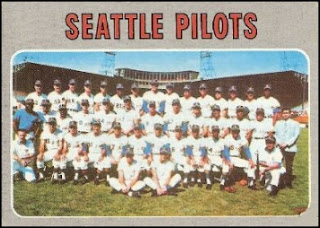 How often do you buy mustard? Once a year? That means your mustard lasts LONGER than the Seattle Pilots!

The Pilots then moved to Milwaukee where they became the Brewers.

As Brewers they have maintained the ability to suck for many years, but as Pilots they could suck for just 6 months.

Oddly enough, the Pilots were only the second team to disappear in one season. The other team was the 1901 MILWAUKEE BREWERS (who became the St. Louis Browns.)

If this coincidence is not enough for you, I off you these other coincidences:

The names Brewers and Brewers each contain seven letters.

Forgive me; I seem to have lost my mind.

Back to the Pilots.

The logo of the Pilots was kind of weird. It looks normal at first glance but upon closer inspection I found it rather odd.

The team was sanctioned to play in the American League in Sicks Stadium. One of the stipulations was that the team would build a new stadium to play in.

Sicks was built in 1938 and only held about 10,000 fans. MLB asked for that to be expanded to 28,000 as the new stadium was being built. Eventually it was expanded, but the increased attendance brought MAJOR problems.

The Pilots were a bad team and they ended up in last place and at the end of the season they were gone.

Sicks Stadium stayed for another 10 years, and then was demolished. Today it is the site of a Lowes Improvement Warehouse. 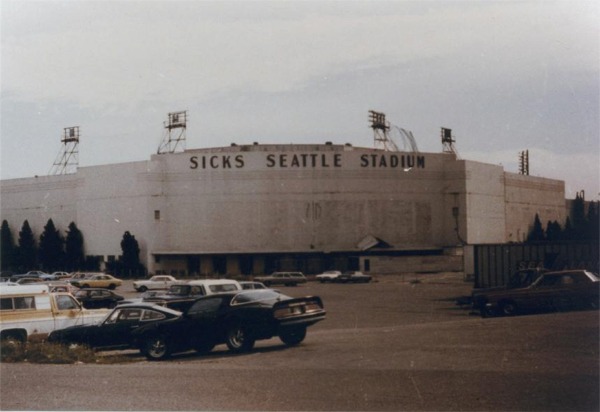 Sadly I never came up with a good joke about the stadium being named 'Sicks,' but I tried really hard!

Here are some of attempts:

Toilets that wouldn't flush! That is pretty sick even for Sicks!

The pilots were playing at Sicks! I hope they didn't get airSICK!

At least Lowes sells toilets that flush, unlike the sick un-flushable ones at Sicks.

Yeah, I wasn't even trying with that last one; I didn't even end it with an exclaimation point.
Posted by Guy Hutchinson at 1:37 PM