Declare yourself. This is the newest movement out to make sure every 18-24 year old votes.
Declare yourself has gotten funny men like Larry David, Ray Romano and even Jay and Silent Bob into a series of commercials to 'get out the vote.'

Like all the movements before this one, Declare Yourself will fail.

HOW COULD THIS BE! 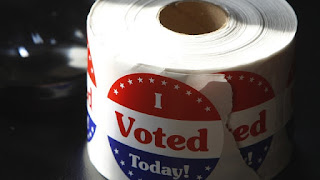 MTV pulled out all the stops for the last election, you couldn't go to a sporting event or theme park without them trying to register. 18 to 24 year olds were BEGGED CONSTANTLY by their favorite rappers and movie stars to go out and vote. Even the WWF (now WWE) got into the act, having Triple H and The Rock plead with the 18 to 24 year olds.

Unfortunately, once they realized that they couldn't vote for Triple H or The Rock, THEY NEVER VOTED.

Well, maybe this isn't such a bad thing. Really, do you think someone who needs Jay and Silent Bob to encourage him to vote should DECIDE THE FUTURE OF THE FREE WORLD?

On the last American Idol, over 200 million votes were cast. This was because the 18-24 year olds CARED who won! THEY DON'T CARE ABOUT THE PRESIDENTIAL ELECTION.

I think that these young people should EMBRACE their apathy, and let cable TV know BEFORE the next election.

That way we have more time to watch Reuben and Clay.
Posted by Guy Hutchinson at 9:45 AM