Fishing for Fun and to Wash Your Soul 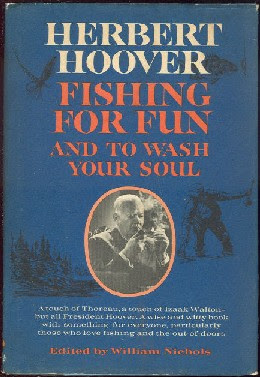 Here is a real find for ya. President Herbert Hoover's book "Fishing for Fun and to Wash your Soul".

Picture Hoover, The Soulwasher walking though an elementary school hooking small children with a giant fish hook and laughing maniacally.

Anyway, President Hoover liked to fish. He fished and fished and fished. So much so that people often told him he smelled like fish. Historians claim his signature on the Declaration of Independence was in the shape of a fish.

Unlike previous Presidents he didn't allow poker in the White House... only GO FISH.

And his soul was a clean as a baby's first lottery ticket.

I just finished reading Hoover's book. Well, not really. I just looked at the dustcover. Actually, it was a picture of the dustcover.

Still, I feel bad for Hoover. I don't know if the vacuum cleaner brand brand was around then, but if it was I bet everyone would tell him "you suck."

I never met a guy named Hoover, but I did meet a guy named Oreck. I smacked him so hard that a chocolate cookie fell out of his ear. Fresh baked, too.

Hoover Dam. THAT is a pretty good legacy. They named a dam after him. I am too bored to write a bunch of jokes where I use the word "dam" but imply "damn". Could you just pretend I did and laugh 6 times. Actually, just 5 times. Pretend the other joke was no DAM good.

Goodness that was funny.

Back to Hoover, you know I am not sure he is even the most famous Herbert in U.S. history! Think about it... I would put Herbie the Love Bug, Herbie Hancock and Herb from WKRP in Cincinnati above Herbert Hoover.

Sad, really. Not sad like when Big Bird was painted blue and forced to sing in a carnival tent, but sad like when you go to eat some cereal and there isn't any left.

Speaking of cereal, I have to go. I'm doing laundry.
Posted by Guy Hutchinson at 12:52 PM