I love the Internet. Isn't it cool? It's full of stupid bizarre things you would never ever get to see if it didn't exist.

Like The Big Abe. I was searching for photos of Jessica Alba (or Bea Arthur... I don't recall) and I found him.

But, I am getting ahead of myself. Let's take a look at his website:

At the very top of the page the title is listed as "mascott."

See, The Big Abe is a mascot. He's not a "mascott" but maybe that's an intentional thing, like Krispy Kreme. 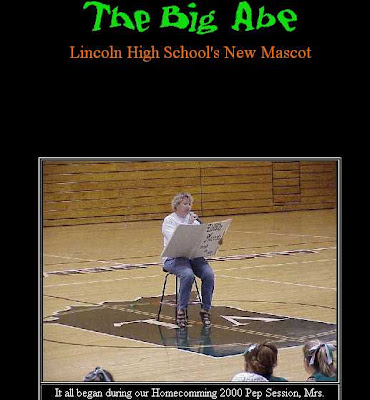 Uh oh. The Big Abe - Lincoln High School's New Mascot. "Mascott" was a typo- and THIS IS A HIGH SCHOOL.

So, the first image is a teacher seated on a chair in the Gymnasium.

It all began during our Homecomming 2000 Pep Session, Mrs. Doyel began to tell us of our schools rich history of mascots.

I know I am treading on dangerous territory here (since I once misspelled the word "taco") but this sentence looks like it was written by a... a... stupid person who writes like that guy who Oprah got mad at.

We were told of the St. Bernard that proudly wore the cape of The Alice's, of the 3 foot statue the graced our basketball court.


I am not even sure what they are talking about. I just like the image of a proud St. Bernard in a cape. Most dogs that are forced to wear clothes never look proud. They just look ashamed.

I also like the idea of kids playing basketball and then tripping over a statue that someone erected on a basketball court.

But for a long time, we had no mascot to represent the mighty Alices. In 1984, a new mascot entered, a mascot that would bring energy back to the crowd, Enter The Big A!

The Big A? What the Ida Lupino is going on here?? I was promised THE BIG ABE! 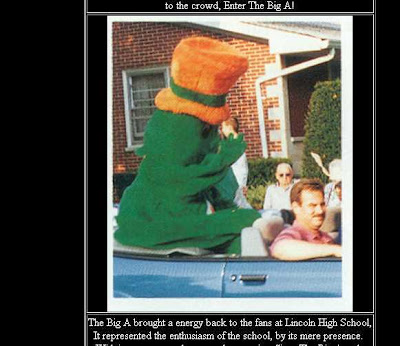 Here we see a picture of The Big A's back. We get a good look Don Mattingly in the passenger seat and that might be Michael Stipe frowning on the front lawn as The Big A tries to get his attention.

The Big A brought a energy back to the fans at Lincoln High School,

Maybe they wrote "a energy" on purpose. After all, he is The Big A! Maybe it's his gimmick, kinda like how the Smurfs always say "Smurf" in place of random nouns.

Or maybe this was hastily written and in the SEVEN YEARS since no one has bothered to proofread it.

It represented the enthusiasm of the school, by its mere presence. With its outrageous dances and energetic rallies. The Big A rode with many a football and basketball team to victory.

He rode with them. Plus he rode with Don Mattingly in the parade. He was in every winner's carpool. 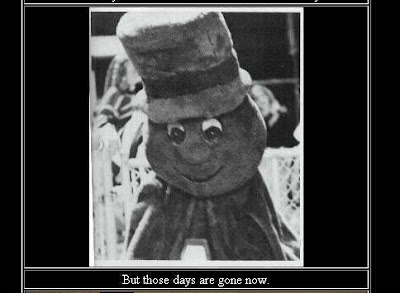 But those days are gone now.

Oh no. Now, I am sad. WHY ARE THOSE DAYS GONE! I am a little afraid to scroll down. What happened to The Big A? I hope it's not polio. 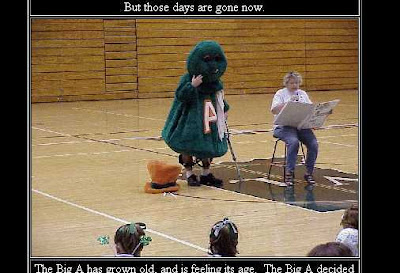 Jeez! This is the saddest picture I saw all day. His little had came off and now he has crutches and one arm in a sling. Worst of all, The Big A now has human hands.

The Big A has grown old, and is feeling its age. The Big A decided that it may be time to find our school a new mascot. The Big A searched far and wide, and turned down hundreds of offers. Finally, one stood out from the rest, a new mascot had been found.

I am in such anticipation I am going to forgo a pretty good comedic paragraph about him searching "far and wide" actually meaning he frisked Jamie Farr and Dom Deluise. 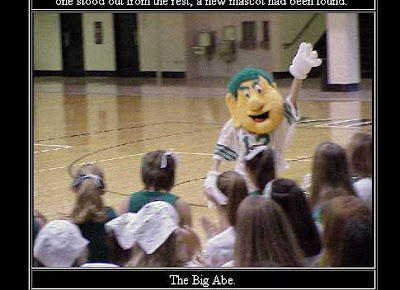 What in the hell is that? 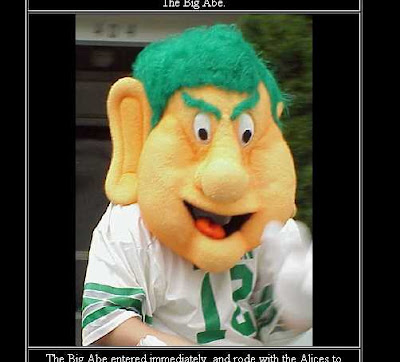 I can forgive bad grammar, bizarre sentence structure and forcing dogs to wear capes. Hell, I can forgive the callus treatment of the elderly displayed here.

BUT I CANNOT FORGIVE THIS.

Oh wait! There is one more thing:

Wow. I thought I was slow at updating this site. Well, I can't wait to hear the ENTIRE story. Maybe it will be up by the end of the decade.
Posted by Guy Hutchinson at 2:54 PM