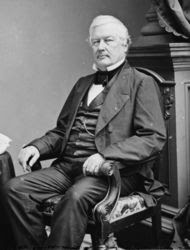 "In his rise from a log cabin to wealth and the White House, Millard Fillmore demonstrated that through methodical industry and some competence an uninspiring man could make the American dream come true. " -first paragraph of Fillmore's official White House bio.

Put on your funny pants, because this fixes to be pretty dang boring.

In his early political days Fillmore became a lawyer and was a member of the House of Representatives. In 1848 he was elected Vice President.

Fillmore presided over the Senate during debates over the Compromise of 1850. The bulk of the debate had to do with the pronunciation of several fruits and vegetables. Fillmore, always the individualist, believed that you should say po-tah-to not po-tay-to, but said to-may-to not to-mah-to. He also said ore-range not oh-range like Senator Setherbacker.

Setherbacker finally compromised on tomato and potato and they both agreed to just "stay away from citrus fruits".

The nation was saddened... eventually. There was no TV back then so most people got their news just by "making it up."

On his plate was a a bill to make California a state. Fillmore carefully considered the proposition, since California brought into question many differing opinions regarding slavery.

In order to have a well formed opinion on the subject, Fillmore became the first U.S. President to visit the Golden State. He toured many of the railroad sites, saw a guy riding a cow and spent a day at Disneyland.

While there a young Walt Disney showed Fillmore his "Submarine Voyage" ride.

"This is my submarine fleet." Disney said "It;s bigger than the U.S. fleet."

Fillmore had the park destroyed. They didn't rebuild for almost 100 years.

As his political party (the Whig Party) disintegrated in the 1850's, Fillmore was forced to join a new party. So in 1856 accepted the nomination for President of the Know Nothing Party. I guess he figured "I have a silly name, so should my party." Oh wait. Whig is a pretty silly name, too. Never mind.

Throughout the Civil War he opposed President Lincoln. Lincoln ended up on the penny, five dollar bill, Mount Rushmore and specially marked boxes of Frosted Flakes. Fillmore has a strip mall named after him near Buffalo.

He died in 1874 after suffering a stroke.

His last words were "the nourishment is palatable."

Fillmore was the first U.S. President born after the death of George Washington.

Fun Facts I just made up about Millard Fillmore:

During the last year of his presidency he sported a high-top fade with a Mets logo carved into the back.

Rather than shake hands or bow he would greet people by punching them in the stomach and proclaiming "gotcha!"

First U.S. President named Millard Fillmore... oh my god! Even the jokes about Fillmore are dull!
Posted by Guy Hutchinson at 9:05 AM