George Washington: The Dude on the Dollar President 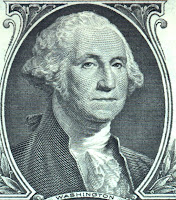 George Washington (February 22, 1732 – December 14, 1799 )was a critical figure in the founding of the United States, and is commonly referred to as father of the nation.

He led America's Continental Army to victory over Britain in the Revolutionary War. In 1789 he was elected the first President of the United States of America. He was the overwhelming popular choice finishing 200,000 votes ahead of his opponents "some guy from Hoboken" and a powdered wig (who garnered 7 votes... and 1 marriage request.)

Washington served two four-year terms from 1789 to 1797. His devotion to republicanism and civic virtue made him an exemplary figure among early American politicians. Still, CNN gave him zero coverage during his term. Sure, they wouldn't exist for almost 200 years but it still reeks of a left-wing bias.

In his youth, Washington worked as a surveyor of rural lands gaining him valuable knowledge of the terrain around of Virginia. Of course, being that this was BEFORE the internet many people think that he spent very little time ACTUALLY surveying this land. Many believe that he spent much of his time eating tacos and playing with a rock he called Mister Cuddlebounds. When asked to survey something, he would just sleep in the barn for a day or two before returning to file a report that read "looks good" or something like that. If someone tried to check on him, they would probably die before they ever got there on foot (remember, this was before the invention of the automobile or the horse.)

Of course when I say "many people" I just mean me and Andre the Giant. Yup, Andre believed this too. I swear he did. You could ask him, but he's dead.

In the early 1750's Washington was sent as an ambassador to ambasatate some French traders and Indians really far from his house. It was here that he met Wilma who later became his wife and knitted the country's first flag. George and Wilma Washington (or Washingstone as it was pronounced back then) lived in a house made of rocks. Every day George would ride his foot powered sedan to the gravel pit where he would break rocks for Mr. Slate. At the end of the day some guy would pull on the tail of a bird causing the bird to yelp and alerting George that it was time to go home. He would then eat a brontosaurus burger and read the evening's paper (which was actually not printed on paper but rather carved into stone.) Paper had yet to be invented... although the paper airplane industry was thriving.

In 1776, George led the army that forced the British out of Boston, proclaiming "this town is only big enough for one annoying accent!"

But later that same year, he was defeated and lost New York City. That night the British troops celebrated by hosting soccer games at Madison Square Garden (which had just opened.) Oddly enough the building was named as such after the wife of it's Virgina born owner Frank Square Garden. It is also important to note that although the name is just gibberish today, it made less sense then because the concept of gardening has not been established and the idea of things forming a specific geometric shape had not been discussed often (since those that tried would usually start to bleed from the ears.)

MEANWHILE, when we last left George Washington he was tired and defeated. WHAT COULD HE DO?
Washington decide to cross the Delaware River in New Jersey and defeated the surprised enemy units.

Their last words were "what the bloomin' onion?"

In 1783 following the end of the war in retired to his plantation on Mount Vernon. The large plantation (today a private residence owned by rapper Biz Markee) gave him ample room to grow corn and play the "greatest game of double dutch you could imagine."

He mounted a bit of a comeback a few years late 1780s when he presided over the Constitutional Convention that drafted the United States Constitution and he released a greatest hits album.

In 1789, Washington became President of the United States and established many of the customs of the government we have today. Scholars usually rank him among the three greatest U.S. Presidents (alongside William H. Taft and Sy Sperling.) During Washington's funeral oration, Henry Lee said that of all Americans, he was "first in war, first in peace, and first in the hearts of his countrymen." During my research I had trouble finding out who Henry Lee was. I think he may have been that guy that screwed up the blood samples during the O.J. trial.

-There were 13 stars on the United States flag when Washington became President in 1789.

-Only President that did not live in the White House. He was involved in the planning of the Capitol.

-Washington did his own bookkeeping and recorded every penny of expense or profit. His ledgers still exist today.


Fun Facts I just made up about George Washington:

-He spent about 80% of his salary on powdered wigs and duck tape.

-He was allergic to Teddy Roosevelt.

-His face is one the quarter and the dollar. His right leg is on the back of a $20 bill and his lip marks are on the $75 bill.

-Whenever he would bathe with the troops he would point to his groin and say "look boys! I am washing a ton!"
Posted by Guy Hutchinson at 1:08 PM