Thomas Jefferson: The Sage of Monticello 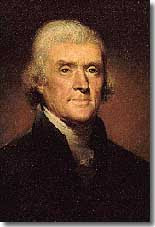 Thomas Jefferson (13 April 1743 – 4 July 1826) was the third President of the United States (1801–1809), the author of the Declaration of Independence (1776), and the primary character influence for two of the four sweathogs on Welcome Back Kotter.

The two most important events during his presidency are generally considered to be the Louisiana Purchase (1803) and the Lewis and Clark Expedition (1804–1806).

IMPORTANT EVENTS DURING THE JEFFERSON PRESIDENCY:

1. The Louisiana Purchase: This is where they bought Louisiana for a handful of beads. They were actually only trying to get Louisiana to lift up it's shirt.

UNIMPORTANT EVENTS DURING THE JEFFERSON PRESIDENCY:

3. Ben Franklin rolled himself in chocolate and mint leaves and dared Babe Ruth to "eat a Franklin Mint."


After that incident Jefferson replaced Benjamin Franklin as minister to France in 1785. Jefferson had sympathy for the French Revolution which led him into conflict with Alexander Hamilton.

Luckily the French Revolution ended when the French ran out of cheese and wine the next morning.

During Jefferson's second term, he spent much of his time keeping the U.S. out of the Napoleonic wars. Jefferson attempted an embargo upon American shipping. This was unpopular since only 1 out of every 20 people alive knew what the word "embargo" meant.

Many people assumed it meant "wearing your pants really low."

Jefferson was the first President to shake hands instead of bow to people.

His nickname was "Sage of Monticello".


FUN FACTS I JUST MADE UP ABOUT THOMAS JEFFERSON:

Midway through his first term he watched Austin Powers and quoted the movie for a year afterwards. He wrote in his memoirs that is was "a regrettable time."

Had a brother named George Jefferson.

Jefferson was fond of his brother's wife Wheezie and would visit her when his brother was working at the dry cleaners.
Posted by Guy Hutchinson at 9:08 AM