Like most kids, I grew up watching Mister Rogers.

When I was a teenager I started to look back at those shows and was fascinated. That's when I became a FAN of Fred Rogers.

Over the years, I have watched the show occasionally. I have also read many of the books that Fred wrote before he died.

The show is still on daily, on local PBS stations and on some of the PBS cable stations.

Watching the show as an adult is interesting. Sometimes it's touching, other times it's dull, and sometimes it is unintentionally HYSTERICAL.

The other day PBS aired an episode from 1993. The description in the TV Guide said "Mister Rogers relaxes by soaking his feet."

That was the whole plot.

Mister Rogers told us his feet were sore, so he went to the yard and stuck them into a kiddie pool. Francois the police officer stops by.

Why does the Mister Rogers neighborhood NEED a police officer? Is there any crime here? I can't imagine.

Still, with the EASIEST police beat in the county Francois has sore feet!

So now, two men are soaking their feet together. 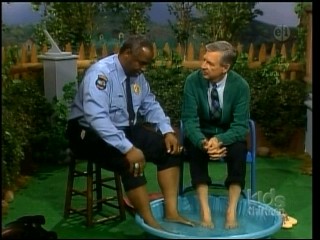 Mister Rogers tells Francois that he was telling his "television friends" about ways we can say "I love you." He asks Francois how HE says "I love you."

Maybe I am a prude, but this doesn't seem like proper foot-soaking conversation.

It does to Francois, however, who breaks into song. 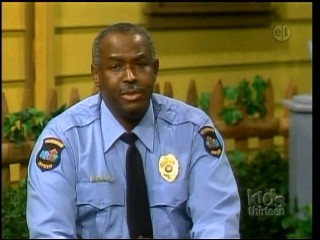 As their feet soak.

Francois finishes his song and Mister Rogers says "I'm very proud of you."

Realizing that he should probably get back to PRETENDING to police a crime free area, Francois takes off.

Not before, of course, Mister Rogers helps him dry his feet. 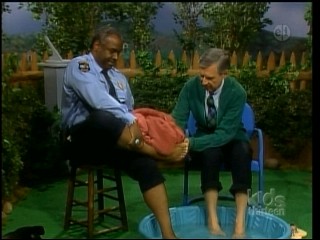 Posted by Guy Hutchinson at 4:29 PM