The Fire Rescue Toy AKA "Faster you foot"

I have always hated gifts.

Speaking of which, we are definitely blessed when others care enough to give a gift to us. Still, there is an odd procedure that goes into opening a gift:

Step 1: You have to say something like "you shouldn't have done this" or "jeez, I didn't get you anything."
Step 2: You open it and either:
a) if you don't like it, you have to pretend to like it.
b) if you like it, you have to express that without making it look like you are just pretending.
c) you have to try and "return the favor" by remembering their birthday or being nice to their kids or not hitting on their girlfriend or something.

Anyway, I always have hated gifts.

That is, until someone gave me this: 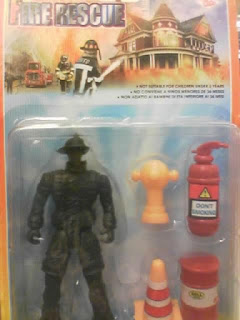 The image at the top shows a Victorian home going up in flames and an unrevealed number of human lives in danger.

If that doesn't say "fun toy" to you, I don't know what would.

On the other side of the package is the warning:

I shall translate the foreign languages:

ENGLISH: Not suitable for children under 3 years.
FRENCH: It's not convenient to have nine menorahs or 36 mice.
ITALIAN: No addition by order of mob boss Al Bambini. It makes him feel inferior as he can not add above 36.

Sure, if this JUST included a photo of a historic building being burned and a warning about the dangers of Italian mathematics it would be a great deal for a dollar.

But there is more!

Look at the fire fighter. He looks strong and bold. Like one of the G.I. Joe figures you traded to the kid down the block who got more than one Cobra Commander for Christmas.

Still, it looks like his hat doesn't fit. Let's take it off and see why:


HOLY IDA LUPINO! The man is DEFORMED! No wonder his hat doesn't fit.

Since it's not polite to mock the disfigured, let us look at his accessories instead.

First off is a red thing that might be Tom Servo's head. Then we have the "don't smoking" fire extinguisher. Of course a traffic cone is standard issue to all firemen, and lastly is the barrel. I guess he has that to throw in case Mario is ever chasing after him.

But, take a closer look at that barrel: 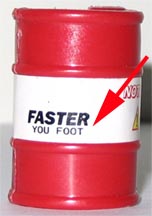 I can add nothing to that sentiment.
Posted by Guy Hutchinson at 11:04 AM