This summer I was lucky enough to have the opportunity to get TWO photos with Geoffrey the Toys R Us giraffe.

Here are the photos side by side. 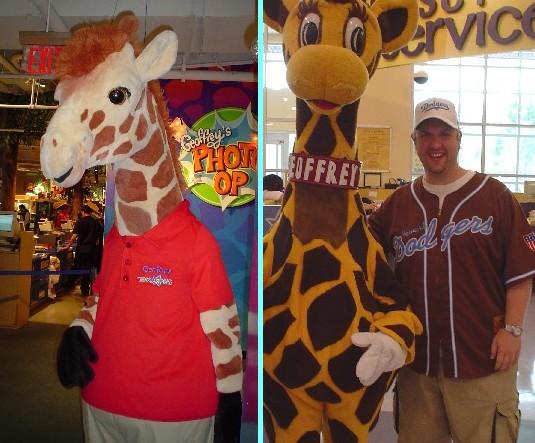 On the left is Geoffrey at Toys R Us in Time Square, New York. You will notice that I am not in the photo. I said that I had the OPPORTUNITY to get a photo with him twice. I didn't ACTUALLY get both photos taken, however.

In New York you have to pay to get your photo with Geoffrey. Seems like a tough rule, but Geoffrey has always been all about the money. I can't blame him for charging. I didn't pay for it because I have a rule about paying for photos with giraffes.

MY RULE FOR PAYING FOR PHOTOS WITH GIRAFFES:
Although exciting, giraffe photos may be excluded if its probative value is substantially outweighed by the cost. If there is confusion of the price, or misleading signs regarding the price, or by considerations of undue delay, waste of time, or needless presentation of cumulative evidence of giraffes. It can also be avoided if I am saving my money to buy a Jar Jar Binks figure.

The photo on the right was taken at a grand opening of a Babies R Us. I guess this seemed like a good time to break out the 'old style' costume. The 'newer' costume on the left is a more realistic costume, in line with the REAL giraffe used in the TV commercials. The 'old style' costume looks more like the old cartoon Geoffrey who appeared in the commercials (mainly in the 1980s.)

The cartoon Geoffrey is naked. His counterpart (despite going for the REALISTIC look) wears a polo shirt and khaki pants.

I guess this is to show the employees that even Geoffrey isn't above the uniform code. Or maybe some kid vomited on the costume and throwing an old uniform over it saved them from having to buy a new one.
Posted by Guy Hutchinson at 1:48 PM