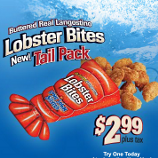 The other day I was driving by a Long John Silver restaurant. The sign in the window read "Lobster Bites $2.99."

I pulled the car over and ran in. I asked for the "$2.99 lobster bites" and handed them money.

They brought out a lobster and it bit me.

No, that's just silly. Actually they gave me a very generous portion of deep fried lobster... or so I thought.

The truth is that it isn't reeeaaaallly lobster.

It does seem odd that they can afford to sell lobster IN ANY QUANTITY for under $3.

Now, I don't have a horror story to tell you. There isn't anything terrible in there, it just isn't lobster. At least not the lobster you expect. 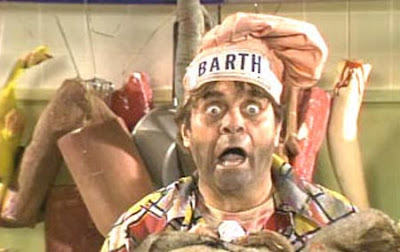 They refer to the meat as "buttered real Langostino" a quick Google search finds that Langostino is a code word for SQUAT LOBSTER.

Seriously, that is what it's called.

According to Wiki they are:

...not lobsters at all, but are more closely related to porcelain crabs, hermit crabs and then, more distantly, true crabs.

I don't have anything more to say. I just wish I had You Can't Do That On Television on DVD.
Posted by Guy Hutchinson at 12:18 PM