That was the night that Hulk Hogan won the WWF title from Iron Sheik and rocketed Hogan to become an international star.

I have a subscription to a service called WWE Classics On Demand through my cable service. It is ESSENTIAL to anyone who is or was ever a wrestling fan. Every month a few dozen programs are added from many different wrestling federations and many different decades.

A long time ago they reran the Hogan/Sheik bout. I recorded it and last night I finally watched it.

Usually I skim through these old wrestling cards. I watch matches that seem good and skip the ones that seem to be a waste.

But not on this occasion.

It was interesting to relive what it must have been like watching that show back in 1984.

The card had some other great moments. A pre-G.I. Joe Sgt. Slaughter was on the card. He was also what they call a "heel" or a "bad guy" or a "Baldwin."

Also on the card was a midget tag match. During the match one of the bald midgets was turned upside down and spun like a top.

I know, I know. It's politically correct to say "little person."

As much as I understand that using the wrong term can be degrading... HE TURNED HIM UPSIDE DOWN AND SPUN HIM LIKE A TOP. The term "midget" was the least degrading part of the match.

Anyway, I am stalling just to add extra paragraphs to a really paper thin topic.


Bottom line is that after Hogan won the title the show still had over 1 hour left. So, to keep the focus on Hogan they cut back to him a couple times.

One time was the famous interview where Andre the Giant poured champagne over the Hulkster...

The other was this... 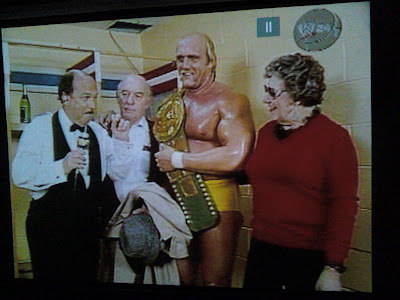 Hulk Hogan was interviewed with his parents.
Posted by Guy Hutchinson at 12:57 PM