Since King Kong came out in 1933 there have been a couple of sequels a few remakes and plenty of rip-offs.

Still, it will surprise many people to know that a 1994 baseball flick is loosely based on the story of the famous beast. 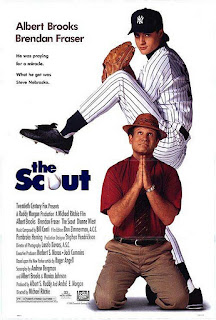 The Scout stars Albert Brooks in one of the few films that he STARS in but didn't write or direct. This means he DOESN'T mug for the camera or do his insipid Woody Allen impression.

Brooks plays Al Percolo a scout for the New York Yankees. It's important to remember that the Yankees were not a great team in the early 1990s. In fact they were fresh off of 4 straight losing seasons (1989-1992) and George Steinbrenner was fresh off a suspension for paying $40,000 to dig up dirt on Dave Winfield.

At least that is what Percolo says. He makes a case that a scout is like Carl Denham in Kong. A scout needs to go into the jungle and bring back Kong.

After a scene where Percolo WATCHES King Kong he is sent to Mexico where he finds Steve Nebraska (Brendan Frasier.)

Nebraska is Kong, but he is also loosely based on Steve Dalkowski. Dalkowski was a legendary minor league pitcher who never made it to the majors. Dalkowski was possibly the fastest pitcher EVER. He threw( what is assumed to be) over 105 MPH. But he was also very wild. At one point he threw a ball that hit a player and knocked off part of his ear.

Steve Nebraska wasn't so wild. I bet the name "Steve Nebraska" was a bit of a play on Joe Montana, too. You know, first name is normal and the last name is also a state that no one would ever want to visit.

In the film, the Mexico locals carry Steve Nebraska to the mound on a big wooden platform. The scene plays very much like the villagers sacrificing Ann Darrow for Kong.

On the mound Steve is a phenom. He throws fast, real fast. AND he can hit.

Percolo shouts "I have found Kong!"

Then they bring him to, you guessed it, New York. The day of the big show (The World Series) Steve goes a bit nuts. Just like the big ape he climbs to the top of the building (this time Yankee Stadium) and refuses to come down.

In the end they send a helicopter to take him off the roof and the film closes with a condensed version of game one of the World Series.

The film was a poor performer at the box office due partially to the baseball strike.

It features a few good cameos from real ball players and both Steinbrenner and Tony Bennett show up as themselves. Amusingly they are both depicted as total jerks.

You gotta commend them for taking a part like that. Unless they were duped into the part. Or bamboozled. Or beguiled. Or, perhaps hoodwinked.

Or maybe I got a thesaurus for Christmas and I love to use it.

Looking back, the King Kong references are actually pretty important to the film. They really help drive the action, and the film is a whole lot of fun. Perhaps all it needs is for Peter Jackson to spend $200 million to make a 3 hour version of it and it too will be considered a classic.
Posted by Guy Hutchinson at 11:00 AM