I have spent a whole lot of time in video stores. I worked at a couple, I have friends that work in video stores and I have a membership to at least two dozen stores in 5 states.

I love them. I have found some of the most amazing videos in the world in video stores. Not in a Best Buy or a Frys, but in the discount bins and 'general titles' sections of video stores tucked away in ugly strip malls in small town USA.

One day as I searched through a 'drama' section I stumbled across Last Rites.

I think did a triple take.

If YOU are also one who lurks in video stores you probably know what I am getting at. Maybe you also did a double take at the sight of Last Rites. (I doubt you did a triple take, and I refuse to believe it unless you have photographic proof.)

For the rest of you, if you are wondering what in the name of Ida Lupino I could be babbling about, perhaps this will help:

Let me assure you, there has been no Photoshop to these images. On the left is Last Rites, a 1988 flick about a priest with mob ties. The film was a flop and Roger Ebert named it the "worst film of the year."
On the right is the Tom Cruise mega-hit The Firm. Released 5 years later, this film told the story of a lawyer who uncovers sinister happenings at a top law firm.

The VHS tapes were produced by two different companies and it is a pretty big stretch to assume that the makers of The Firm had any desire to have the two films seem connected.

It's just one of those things. Still, it's remarkable. Both have the profile of a man, highlighted in blue. The face is almost at the exact same angle! In addition, both faces have superimposed people ghosted onto the image. Even the priest collar on Last Rites lines up with the light from the door on The Firm.

This is not the first set of semi-twin boxes I have seen. 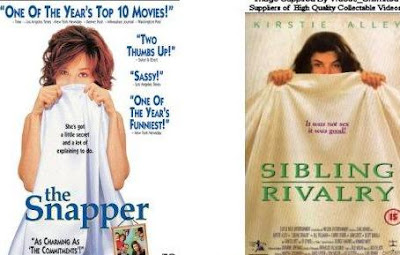 The Snapper and Sibling Rivalry both feature pretty women who are either:

The cover of the horn dog classic Spring Break has been duplicated more recently by the film American Women.

But none of these are as startlingly similar as The Firm and Last Rites.

I have never watched Last Rites, and all I remember about The Firm was a scene where Wilfred Brimley got a vicious beat down.

I have to wonder, does Tim Conway suffer a similar beating in Last Rites? If so, I suggest they file a lawsuit before the statute of limitations is up.

UPDATE:
Take a look at the DVD cover for 2005's Casanova:

Now take a look at the cover for the 2000 film Italian For Beginners:

Didn't see the resemblance? Then take a closer look at the BOTTOM of both of those boxes:

What on Earth is going on? How does that happen TWICE? Look closely at the pig, his eyes are saying "please don't sue for plagiarism, and don't stick an apple in my mouth when you cook me. I hate apples."