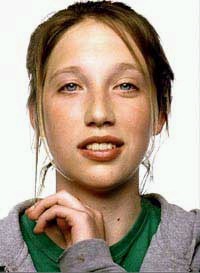 One ad stood out, the one starring a quirky teenager named Ellen Feiss.


The ad featured Ellen in front of a white background. Ellen told a story about how she was writing a paper on a PC but the computer started to go "beep beep beep beep beep" and then she went "eh?" and then like half her paper was gone. Then she had to write it again but she wrote it real fast and so it wasn't as good. She said it was kind of a "bummer".

The commercial works for many reasons. First of all, most PC users HAVE had similar experiences (except for the "beep beep beep beep beep" part) and Ellen has a charm to her.

Within a few days of the first airing of the spot Ellen became a cult phenomenon on the web. Legions of "stoners", who mistakenly assumed she was high, acclaimed her as a hero. Thousands of parody ads appeared on message boards and websites. 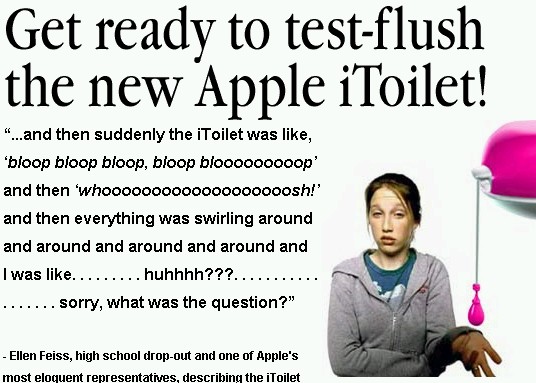 Ellen was approached by both Letterman and Leno to appear on the show, but turned both of them down. She was also contacted by the makers of "Shallow Hal" for some possible film work that never materialized.

Interestingly, Ellen got the Switch commercial by accident.

She showed up to watch some other Apple spots with a friend who happened to be the director's son. Since there were some open spots, Ellen ended up recording a commercial herself.

Ellen also did another commercial that was not aired. This was for the Apple G4.
It was a good commercial, but it did not have the pizzazz of the FIRST spot. This leads me to an important question: What happened to her computer that caused it to go “beep beep beep beep” and devour half of her really good paper?

I was determined to find out so I started to fool around with my own PC. I typed a really good paper and hoped that it would 'devour' it.

Then I stared at the screen for about an hour waiting for it to do so. Soon I begin to get really sleepy. I dozed off and was awakened by the same “beep beep beep beep” sound Ellen heard. I sat up and looked at the screen and HALF OF THE PAPER WAS GONE.
Maybe Ellen did the same thing I did, pass out on the “backspace” button. The beeping of the stuck key woke her up before the whole thing was gone.

Like Ellen, I had to rewrite the second half of my paper. My paper is this article. The rewrite isn’t very good, but neither was the original.
Posted by Guy Hutchinson at 12:49 PM