The year was 1983. Jackie Collin's 'Hollywood Wives' topped the bestseller list, the Baltimore Orioles were baseball's world champions and Ronald Reagan was in the White House.

As a former matinee idol, Reagan had a lot of friends in Hollywood. So, it was no surprise that he chose the year’s biggest star to be Santa at the White House. Then he found out that E.T. wasn't real and went with the year’s SECOND biggest star. 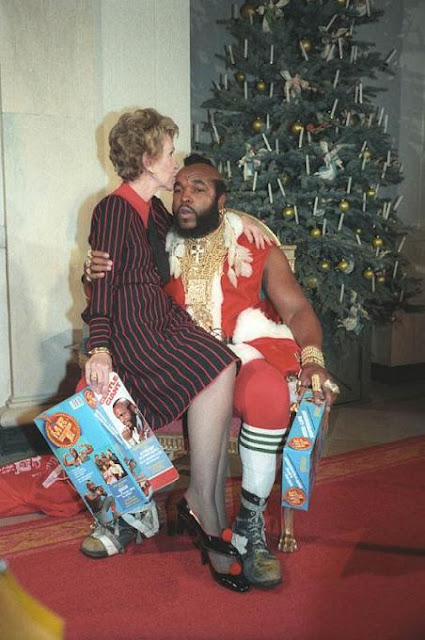 And why shouldn't he be. He is at the White House, with the First Lady of the United States sitting on his lap and kissing him on the forehead. This is an honor usually reserved only for the President's themselves (and Paco, Rosalyn Carter's pool boy.)

Also, notice that Mr. T and Nancy are both holding Mr. T action figures. I am not sure what they did with them, but I hope that after the photo was taken Mr. T and Nancy ripped open the boxes and made the figures fight like rock 'em sock 'em robots.

MR. T: Hey, let's have our action figures fight!
NANCY: OK, yours can be Jimmy Carter and mine can be Paco.

I had Mr. T sign my copy of this photo a while back. His eyes lit up when he saw it.
"Look, it's me and Nancy!" Mr. T then showed the photo to the security guards and other bystanders. Everyone seemed amazed.

As a matter of fact, Mr. T was so amazed by the whole event that when he spoke at Reagan's re-inauguration he said "Only in America could a black man from Chicago go to the White House pretending to be a white man from the North Pole and not get arrested." 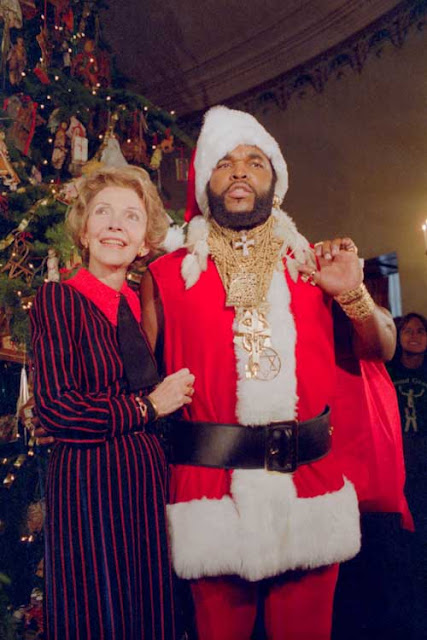 I don't know if other celebrities have played Santa at the White House since 1983. If they did, they had some pretty big shoes to fill.

Posted by Guy Hutchinson at 7:00 AM