I like Skeet Ulrich. I thought he was really good in Scream and uh... uh... well... I just like that he is named Skeet.

Anyway, last night I decided to take a gander at Teenage Mutant Ninja Turtles. Filmed in 1991 the film features a 21 year old Skeet in the background as an extra.

Sam Rockwell was also in the film, but he's no extra. He plays the "head thug." He only has a couple of lines, but they are kind of pivotal to the film.

He's not really famous, but I remember his name because of a scenario I witnessed in a movie theater when he was starring in Confessions of a Dangerous Mind, a truly awful movie about Gong Show host Chuck Barris.

Some old guy approached the counter, pointed at the board and shouted "Hey! Where in blazes is the movie about the Gong Show?"

The cashier points at the board and says "It's Confessions of a Dangerous Mind."

"What? That says it stars Sam Rockwell! It stars George Clooney and Julia Roberts. They are the rootin' tootin' stars of that there picture show!" Then the old man started to jump up and down like an insolent child.

The irritated clerk told him to "act his age" and the old man immediately turned into a pile of dust.

Anyway, the point is that some old guy didn't want Sam Rockwell to be listed as the star in a movie he was a star in.

Sadly, that was a few years ago and the old guy is probably dead. I shouldn't be making fun of him.

Let's talk about Skeet instead. Skeet is also an extra in Weekend at Bernies. If you ever see the film, look and you can spot him, standing in the background.

I have been an extra in a bunch of films. One of my favorites was a John Leguizamo boxing flick.

I never saw the film, but I bet I didn't get a great on screen shot like Skeet did.

Still, my memories of the filming are vivid as any movie I have seen.

I remember this real nerdy accountant looking guy who was in the front row. Actually, I have an accountant, and he doesn't look anything like this guy. This guy looks more like a dentist.

Anyway, this guy was jumping up and down and waving his hands around to try and make sure you would notice him. Leguizamo complained and they stuck him in the back, next to me.

Yeah, that pretty much assured me that I wouldn't be in the film.

Here is a still of Sam and Skeet in TMNT: 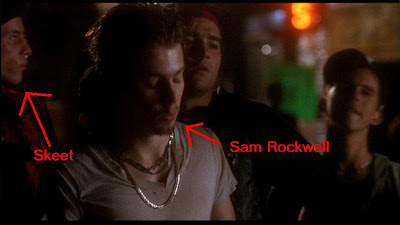 Posted by Guy Hutchinson at 2:33 PM