Congressional Medal Winner and writer of such songs as Yankee Doodle Dandy, Cohan worked as an writer, composer and occasionally as an actor.

Swiss born Cohn has produced 18 films over the past 40 years. Most of his films have been art house flicks such as 1995's Two Bits.
If he decides to produce Armageddon II or a film starring a talking monkey, I might be interested in learning more about him.


Star of many motion pictures including It Happened One Night and the 1934 version of Cleopatra.

Famed singer who, in 1975, was the first black singer to win the "Best New Artist."


Famed singer who starred on TV's "The Nat King Cole Show." His real name was Nathaniel Adams Coles. Technically he was not a king.

As an actress, Constance appeared in over two dozen films between 1919 and 1949. One of her most notable films was Alfred Hitchcock's The Rope. She was a playwright with a handful of titles to her name.

Appeared in dozens of movies between the mid teens and early 1940s. He was usually billed fifth or sixth below big stars such as Bob Hope in Thanks For the Memory and James Cagney in Yankee Doodle Dandy.


A TV staple even today, Gary Collins has hosted many talk shows and acted in roles on everything from Fantasy Island to Jag.


An award winning actress with a long career, highlighted best by her work on Dynasty. She also replaced Elizabeth Taylor in Cleopatra, when Liz became ill, only to have Liz replace her when she recovered.
She did get her revenge years later when she replaced Taylor in the role of Pearl Slaghoople in The Flintstones film series.

Here is a unique one! Michael Collins was an Apollo 11 astronaut. He and his fellow crew members are honored with a special moon shaped "star" on Hollywood Boulevard. 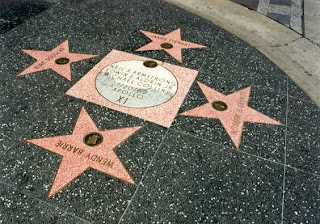 
The Genesis and solo rock star, Phil Collins has had seven number one hit songs in the United States... despite looking like a grown up Charlie Brown.

born Clayton Johnson Heermance Jr., Bud was a very famous radio host who later became a TV star as the host of

.
They tried to revive that show decades later, but the concept of "beating" a clock seemed too politically incorrect... so they just gave the clock a "time out."
(Sorry, I let Bazooka Joe help write jokes on this one.)

Honored in TWO categories, Ronald was a British born TV and film actor known for his rich voice. He hosted the TV show Four Star Playhouse and was seen on the movie screen playing the popular character Bulldog Drummond.
He also played the voice of Donald Duck, a Donald Duck look-alike and Donald Duck's Internal Monologue in three different cartoon. Each time his deep voice was used as a humorous contrast to Donald Duck's regular voice.

A comic member of the Bob Hope radio show, Jerry was also seen in many of Bob's comedy specials sporting his trademark handlebar mustache. Jerry is perhaps best known to today's audiences as the voice of the March Hare in the Disney animated film Alice In Wonderland.
Posted by Guy Hutchinson at 9:53 AM