The Goonies 'R' Good Enough videos were two of my favorites growing up. In fact, I saw the videos long before I saw the movie.

The song is OK, and the tie in is great (Goonies is an awesome film) but the real appeal of the video, to me, was the stars of the WWF. 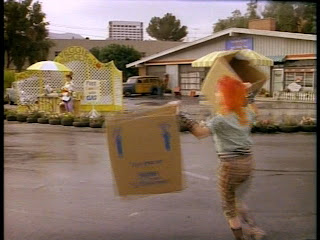 If you don't remember Wendi, I am not surprised. But let me tell you this: in the months right before and right after Wrestlemania Wendi was arguably just as popular as Hulk Hogan.

Wendi was "best friends" with Cyndi Lauper in thee WWF storyline and also served as her manager. Wendi was the WWF woman's champion.

Then Wendi demanded more money from Vince McMahon and Vince set up a match between Wendi and an unknown masked wrestler named The Black Widow.

The plan was for the masked wrestler to lose to Wendi. That didn't happen. The staged ending was changed by Vince and no one told Wendi.

The lady under the mask, Wendi's rival The Fabulous Moolah, pinned Wendi and a surprised Wendi Richter was never seen on WWF TV again.


But we get to see her here hawking veggie burgers at a gas station. 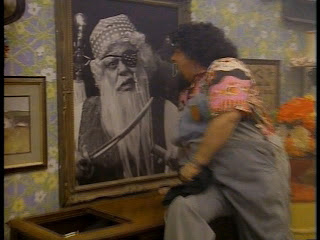 Cyndi's dad (played by Captain Lou Albano) is upset. Creditors are going to evict them. We know this because a goofy announcer told us. Lou speaks to a photo on the wall for a while and then Cyndi enters and says:

"I can't take it no more." she is tired of the pollution and traffic.

David Wolf (Cyndi's scrawny real life boyfriend and manager) reminds her that "this place is a gas station." 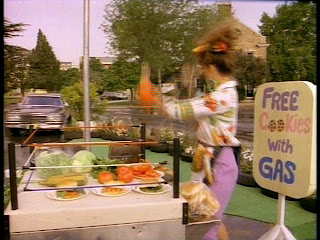 Suddenly a limo pulls up and Cyndi says "customers" in a voice so goofy that you start to miss the announcer. 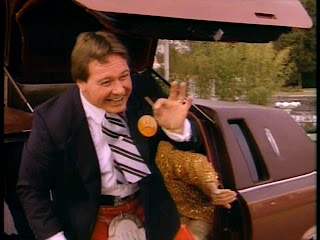 You know this means bad news for the Lauper family and David Wolf and Wendi Richter who... I guess... work for them. 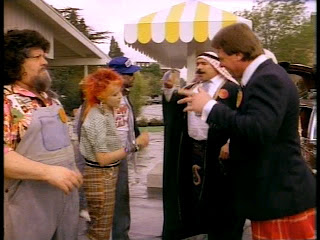 Even though he's not family, David Wolf gets right up in the grill of The Iron Sheik as he proclaims the gas station to be his "property."

See, he's a Sheik and he's in the oil business. Wrestling always plays up stereotypes. 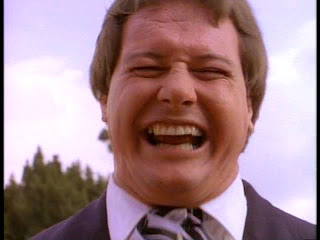 Yeah, in an extreme close up Roddy tells Cyndi's mom that since she made cookies she should "take her face back inside there and bake a suitcase."

The music for the song starts.

Then all hell breaks loose. 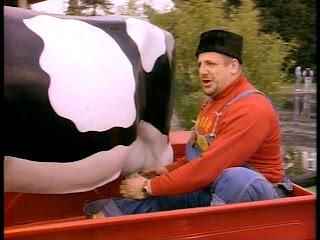 The Fabulous Moolah drives up in a pickup truck. In the bed of the truck Nicolia Volkoff is pretending to milk a plastic cow as he croons the Russian National Anthem.


Moolah parks the truck and kicks out Wendi. The era of the veggie burger stand is over.

Instead Benihana Hibachi chefs take over. 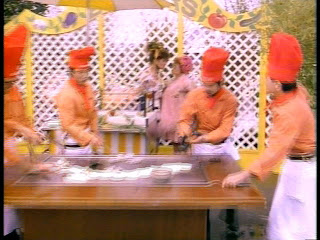 I'm starting to think the Iron Sheik runs a better gas station than Mom and Pop. 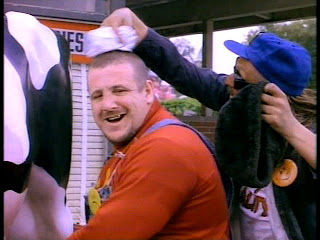 Anxious to kiss up to the new management, David Wolf starts to polish Volkoff's head.

Next Cindi tries to feed the plastic cow some milk. I don't know why, but that grosses me out.

In the meantime, Volkoff tries to lip-synch Cyndi's song. 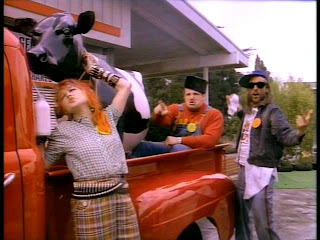 Not being able to lip-synch ruins Volkoff's mood. 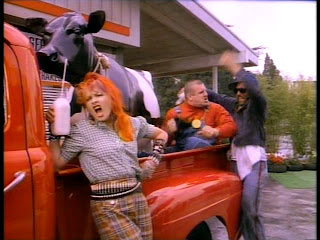 Then he takes part in a mob assault of Wolf as Cyndi removes multiple statues of dogs from the gas station. 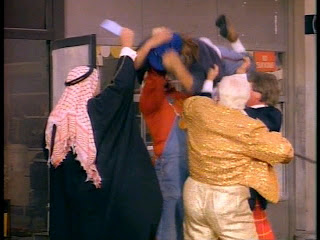 Hmmm. I question the sanity of having more than one statue of a dog in any place other than a dog statue store.

I also question the sanity of having a dog statue store.

After the dog statues go it's time to remove the photo from the wall. 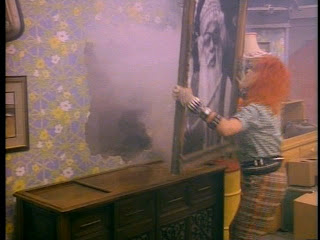 What's this! A secret cave! Good lord. Inside the cave is a bunch of skeletons and, of course, the Goonies: 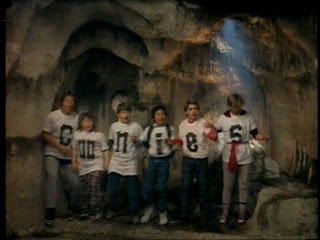 Yeah, they got the whole cast back together for the video. Actually, I don't think "back" is the appropriate term. The video seems to have been made during the making of the film and a small segment of it is played on the TV in the film.

Still one must applaud them for being able to cast Chunk.

It should be noted that we have passed the THREE minute mark at this point.

Its an epic video.

The Goonies have a matching map that fits in with the one that Cyndi has.

Oh yeah. I forgot to mention, Cyndi found a map in the hands of a dead guy just steps inside the cave.

Time had done a number on the dead guy his flesh and clothing are long gone. His map, is is great shape, however.

As soon as the maps are placed side by side we are treated to a highlight reel of footage from the film. 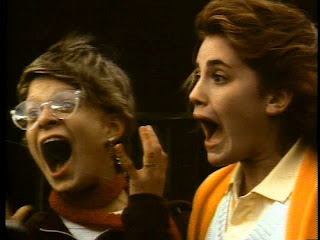 When we cut back to the cave things get weirder. 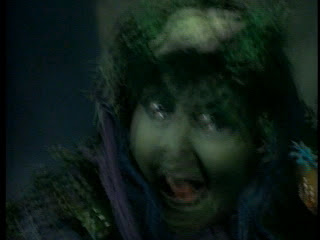 Then all the bad guys show up as pirates. Roddy even gets smacked upside the head by Corey Feldman. 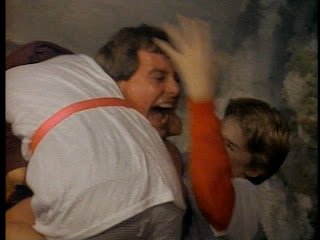 Then David and Wendi find the cave. They too ignore all common sense and climb into a smoking hole in a gas station wall. 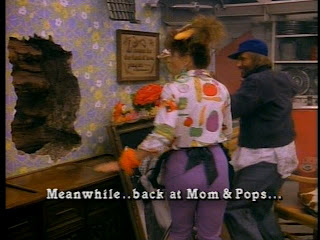 Meanwhile The Sheik stands guard over a kneeling Mrs. Lauper and I started to worry that he might use his old country techniques to make her humble. 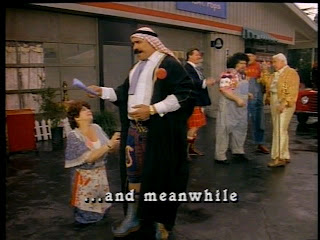 But hey! Wait a minute! Isn't Sheik inside the cave dressed as a hulked up Iranian Johnny Depp? 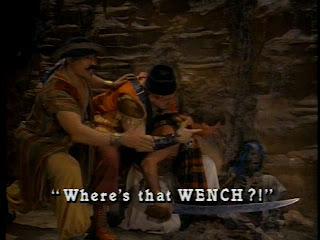 Yes he is. So there are TWO Iron Sheiks!

Before I had a chance to think of the ramifications of such a discovery we see this: 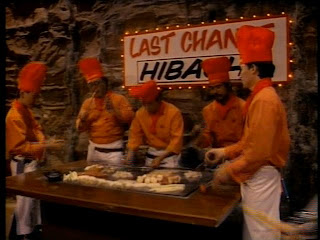 Did Bennihana's pay for all this product placement? 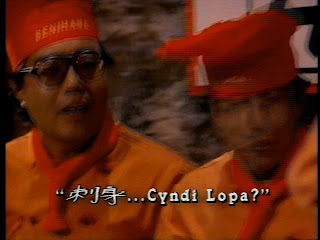 One borderline racist joke later and Cyndi is stuck on a bridge: 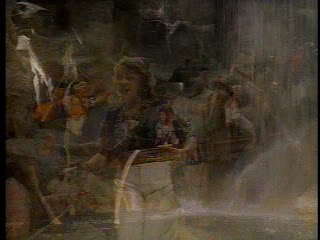 What should she do? She asks Steven Spielberg for help.

Unfortunately he doesn't know what to do. He's probably too busy trying to decide if he should grow a beard and if it would have been funnier if the chef said "Cyndi Ropa." 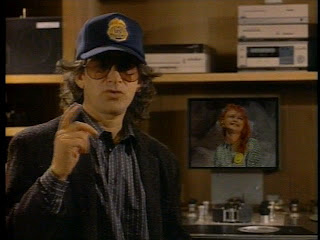 So the announcer comes back on to do more goofy announcing promising to show us what happens in the conclusion "coming soon to an MTV near you."
Posted by Guy Hutchinson at 9:18 AM