Cameraman Zoom: My brief encounter with The Iron Sheik

The Iron Sheik is one of the best known wrestlers of the 1980s. He was most famous for winning the WWF title from Mr. 110% Bob Backlund.

Backlund, if you don't remember was a rather bland technical wrestler who held the WWF title for 6 long years.

Anyway, Sheik won the title and then passed it along to Hulk Hogan and thus Hulk-a-mania was born.

It does seem odd. Suffice to say, horror conventions are jam packed with the stars of yesteryear. You don't have to have ANYTHING to do with horror films. You just have to rent a table and sell your 8x10 photos.

The price for an autograph from anyone at these conventions is generally $20.

I have seen Sheik at a few of these conventions and he always makes me smile. I liked him a whole lot when I was a kid. I always cheered for the "bad guys" and Sheik was one of the baddest.

A few years ago I saw Sheik step on top of someone's backpack and almost take an ugly tumble. But I passed on giving him $20.

Finally this year Sheik got my $20 for a combination of reasons. Nostalgia, Sheik's advancing age and a lack of cooler guests made Sheik the top draw for me at the MonsterCon.

Sheik was sitting at a table next to Captain Lou Albano and in front of Nikolai Volkoff.

As usual, Sheik was wearing an American flag bandanna. It's no longer in fashion to be a Iranian Sheik and he knows this. In fact he wrote USA #1 on my autograph. 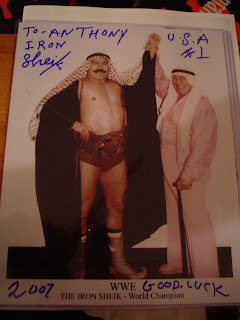 I had him personalize it to my middle name: Anthony. Not a good idea. Sheik didn't know how to spell "Anthony." I assume "Guy" would have been less trouble. Uh... maybe.

Sheik also wrote "Good. Luck" I don't know why he chose to put the period in the middle or what he was wishing me luck in. I am just glad he wished for it.

Also take note of how he prints "Iron" and writes out "Sheik" in cursive.

The more I look at this, the weirder it seems. Maybe he wasn't writing "USA #1" maybe he was writing "USA1" and drawing a crude picture of the USA1 World War II biplane bomber. 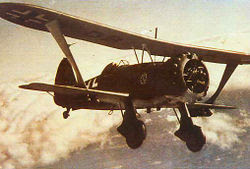 Anyway, after getting the autograph I paid an additional $5 to get a photo with The Sheik.

Like a shark who smelled blood in the water, Captain Lou smelled money in the air... and fake blood. It was a horror convention.

"You can't come in here with a beard" he joked gesturing to my beard and then his own.

I politely laughed but it wasn't so much of a joke as a chance for Lou to try to find common ground with me.

"We both breathe air." would have been his next comment if I hadn't been trying to talk to the Sheik.

He called me by my name and told me to make sure to visit his table. He put on the hard sell. It was hard to refuse Captain Lou.

But first I had to get a picture with The Sheik. He handed me his world title and showed me how specifically he wanted me to hold it.

It actually isn't the world title. It's a replica belt anyone with a couple hundred bucks can buy on eBay.

But this one belongs to The Iron Sheik. I can only imagine where this belt has been and what it has seen.

He kept talking for about five minutes. Finally, my friend (who I will now claim on my taxes as my personal cameraman) just snapped a photo rather than wait for Sheik to finish what might have gone on all day. 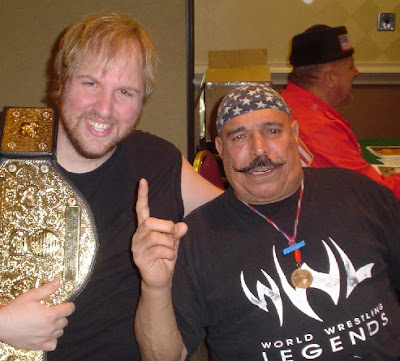 Afterward I headed over to Capitan Lou's table and then quickly rushed past Nikolai Volkoff before I was out $75 in just five minutes.

In the interest of full disclosure here is my photo with Captain Lou: 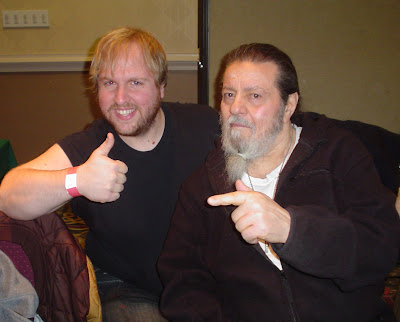