There is a hip trendy new party that is sweeping the nation. Its the "Mashed Potato Bar Party."

In this party people enjoy mashed potatoes in martini glasses and we nominate a presidential candidate who will not win and instead just siphon votes from the established candidate whose beliefs are closest to ours.

The whole idea of eating mashed potatoes out of a martini glass seems like something that Weird Al would have done on his old Saturday morning show, but its better than it sounds.

I recently threw a Mashed Potato Bar Party, and no, you weren't invited.

Nor did I have martini glasses.

I did have margarita glasses. See, when it comes to alcohol I am not the sophisticated erudite martini type. I am more of the Hawaiian shirt and shorts margarita type.

Anyway, here is what you need to throw your own party:

Don't be surprised if you make "the list" next time I break out the Colt 45.

#3 Sour cream (I left it in the sun for a few hours to make it extra sour.)

#5 Salsa. I mean the condiment, not the dance. Shoot, the dance would be good too. I better throw a whole new party.

#6 Cheese. Lots and lots of cheese. I had grated cheese, shredded cheese, cheese wiz and "I Can't Believe it's Not Cheese."

#7 Broccoli. Because you always need something that sucks so you remember what things are cool.

#8 Chives. Because it's fun to say chives.

For starters, I invited myself. I was the genial host for my party. 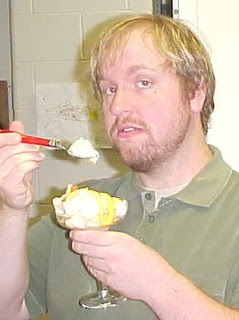 Like any good host, I remembered which piece of broccoli I dropped on the floor and which products were waaaaay past the expiration date and I made sure not to tell anyone else.

You also need guests (were dropping the whole # thing.) I took a few photos of them, but I never got their permission to put them on the site so I have obscured their identities.

Here is the first dude. Let's call him 'Craig.' 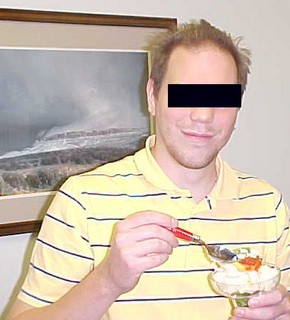 'Craig' heard the words "mashed potatoes" and 'bar,' but didn't know I was combining the two. He punched me for taking this photo.

'Craig' liked the cheese wiz and the salsa. He also took a bunch of my CDs and broke some shelves in my bathroom medicine cabinet. I am glad he came by.

The next guest was much more excited to attend. We can call him 'Craig' as well. 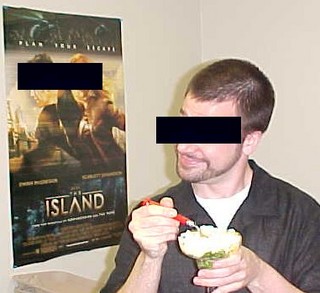 'Craig' was also having a good time, but he got into a heated argument with me about whether "chives" and "green onions" were the same thing.

I don't remember what my opinion was except that I am sure it was the right one. I do regret the whole "eye full of salsa" incident.


I have a photo of one more guest: 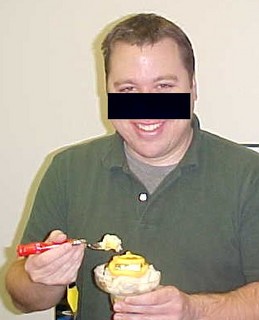 We can't call him 'Craig' because that was his real name. Lets call him 'Beatrice.'

'Beatrice' didn't take my side in the whole chives/green onions debate. He also suggested that we "play karaoke" but somehow insisted on having absolute silence and a hammer in order to "play karaoke."

I don't think he knew what karaoke meant.


In the end, the Mashed Potato Bar Party was the most fun I have ever had involving potatoes.

Except for that time I took a Mrs. Potato Head and had her make out with my Luke Skywalker figure.
Posted by Guy Hutchinson at 1:45 PM